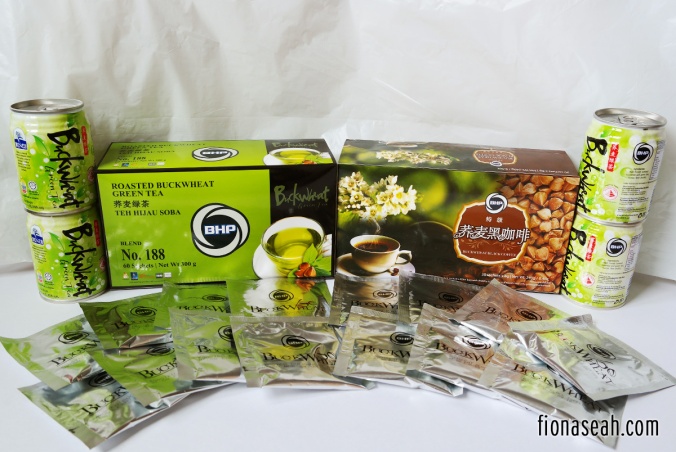 Two months ago, my mother received a phone call from a close family friend. Thinking that it was just a casual phone call to catch up with a long-time friend, my Mom answered it with one of her chirpiest tones. But soon, the mood grew sombre as Auntie Renee’s* voice turned brittle. Carefully, she relayed the news of her cancer diagnosis and added that she was given a terminal prognosis. As the cancer has spread to various parts of her body, recovery was not likely. The unfortunate news shattered the tiniest hope she had completely at the hospital, and her accompanying husband who had always assumed a hostile and fierce look broke down and wept at the thought of losing his wife.

Auntie Renee, once a smoker, is over 60 years of age.

But she is not the only person I know who has fallen prey to cancer or other deadly health problems.

The past few years have witnessed how my paternal aunt, grandmothers (from both sides), grandpa, other family friends and celebrities I looked up to succumb to cancer, stroke and heart failure (also the top causes of death in Singapore). It’s devastating to see a person once so full of life and happiness suddenly be reduced to skin and bones and lying helplessly on the hospital bed the next moment, awaiting death. Only those who are diligent enough to go for regular check-ups are granted (mostly) a few more years to live. My paternal aunt and maternal grandma lived for another 10 years or so before passing away. Nonetheless, those were 10 torturous years for them as they had to be on medication for the rest of their lives. Also not mentioning the pain and suffering they had to (silently) endure. Both were non-smokers and non-alcoholic drinkers (and perhaps eating healthily) even before the misfortune was meted out to them.

Very often as we age, we experience health issues with greater frequency as our body become weaker and more prone to illnesses and diseases. It’s very common for people over the age of 40 to be diagnosed as having diabetes [source] which often leads to hypertension (for type 1 diabetes), stroke and a myriad of other heart diseases. As for cancer, it may affect all ages, even foetuses, but the risk for the more common varieties tends to increase with age. [source] are the top causes of death in Singapore. While diabetes and cancer may be attributed to poor lifestyle choices and genetic susceptibility, the cause of the latter is also largely associated to environmental factors (air pollution, UV radiation etc.). Some may even argue that cancer is mostly “bad luck”.

*Names have been changed to protect the family’s privacy (as some people I know are readers of my blog).

Prevention is the best medicine

Instead of leaving your health to fate or your doctors (chronic diseases can chalk up a huge bill), I feel that many people overlook the fact that problems like diabetes, heart attack and cancer can be prevented, or at the very least, forced to slow down in their progression [source]. And this definitely doesn’t cost as much as your medical bill.

My penny-pinching parents for one generally are not willing to spend money on health. My Mom in particular is a worrywart. Yet, she avoids doctor visits like the plague even when she has severe migraine because she’s afraid to hear unpleasant stuff about her health from the doctor (like brain cancer or something), or that other health problems would surface during the check-up. I’ve tried persuading her many times but failed. She prefers to live in ignorance. *sigh*

My Dad fell ill once and was tested positive for high blood pressure (caused by smoking, his love for rice dishes in large portions, and sitting in his taxi for hours). Since then, he has to attend scheduled appointments to see his HBP specialist, much to his displeasure. His doctor monitors his condition very closely and had threatened to put him on life-long medication if the problem worsens. He tried cutting down his rice intake (instead of smoking because he finds it very difficult to quit the habit *sigh*) but the result was short-lived as my Dad would revert to his rice-based diet after the appointment.

But one thing I know for sure about my parents is that they are not choosy eaters. Unlike me, they don’t mind downing a huge pot of the bitterest herbal tea in the name of health (and to avoid seeing the doctor for my Mom), or drinking a cup of prune juice religiously to aid digestion. I can’t do that *oops*.

However, these health foods don’t combat against more serious illnesses per se, and can be quite expensive in the long run.

Upon hearing about my Dad’s health condition, his diabetic friend who also suffers from hypertension recommended him to drink a certain kind of green tea. It’s a well-known universal fact that green tea does reduce the risk of cancer. It even has the ability to prevent cancer cell growth and kill cancer cells with no ill effect on healthy cells [source]. Furthermore, it also helps lower blood pressure naturally [source], hence reducing risk of stroke, heart failure and heart attack. [source] Of course, apart from these facts, green tea has other benefits as well such as it being rich in vitamins A (essential for functioning of the eye), C (enhance absorption of iron from non-meat products) and E (antioxidant). 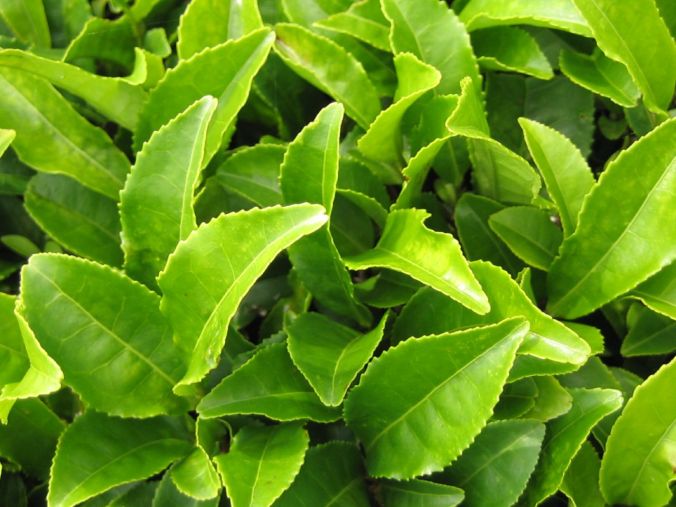 But what is unfamiliar to many people is buckwheat which is as beneficial to the health as green tea. And despite its name, it is actually a fruit seed and not a cereal grain. The superfood is triangular in shape, usually brown in colour and has more of a soft and subtle flavor. When roasted, it can give an earthy and nutty taste. It can be served as an alternative to rice or made into porridge, making a great substitute for grain for people who are sensitive to wheat or other grains that contain protein glutens. [source] 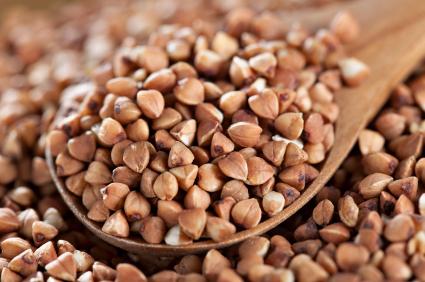 Buckwheat has been known to lower the risk of developing high cholesterol as well as high blood pressure. It is a good source of magnesium and dietary fibre. Magnesium helps in the absorption and retention of calcium and dietary fibre aids the digestive system. The former also has powerful anti-carcinogenic effects, primarily on the development and metastasis of breast cancer cells in postmenopausal women and colon cancer [source].

Trust me, the above is just an excerpt of what I’ve read about Buckwheat; there are way more benefits than that (you may read it if you’re keen). That’s how powerful Buckwheat is. Now, imagine it combined with green tea. The result is formidable. 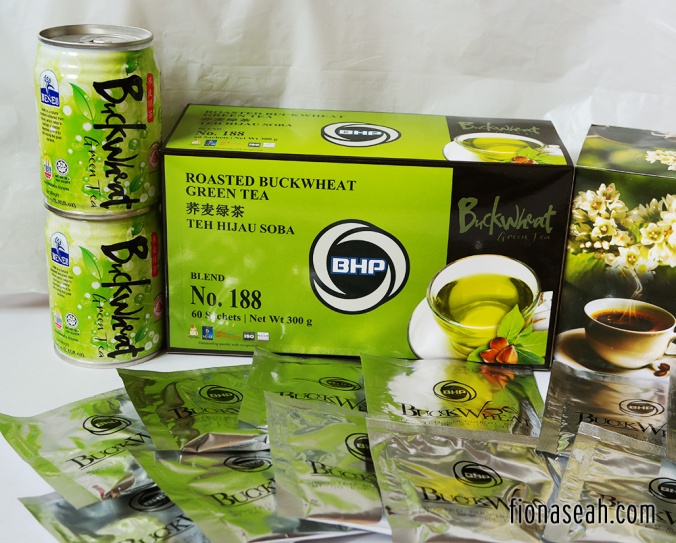 My Dad was introduced to Roasted Buckwheat Green Tea by BHP and within a month, he could see a remarkable improvement to his blood pressure and overall health. From a blood pressure reading of 155/87 (high Systolic BP & normal Diastolic BP a.k.a Isolated Systolic Hypertension) in December 2014, it dipped to a healthier reading of 130+/80+* (both in the normal range but still on the high side – no thanks to his smoking habit and more-than-occasional Roti Prata breakfast -_-) by his following medical appointment in end January 2015. The reading remains in the normal range even today. 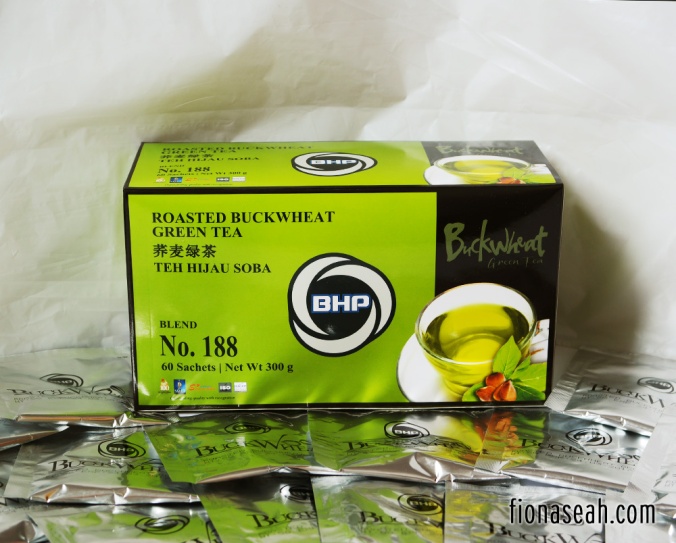 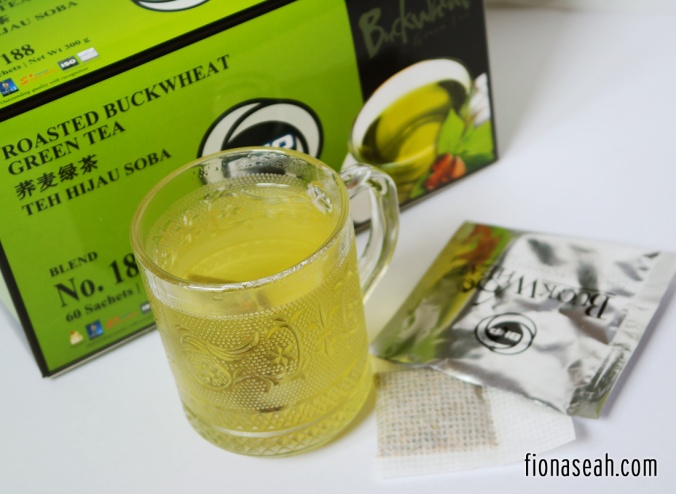 It has impact my Dad’s life so positively that he started getting the rest of the family to drink it (Mom’s happily drinking it everyday *phew* at least I know her health is partially taken care of!). One isn’t enough for a tea lover like me so I tend to help myself to more than one sachet a day. It kinda reminds me of my favourite free-flow hot green tea at Itacho Sushi Restaurant which I had been searching high and low for and this taste is perhaps the closest I’ve found so far! But in comparison, this is definitely more fragrant and flavourful (because of the buckwheat). 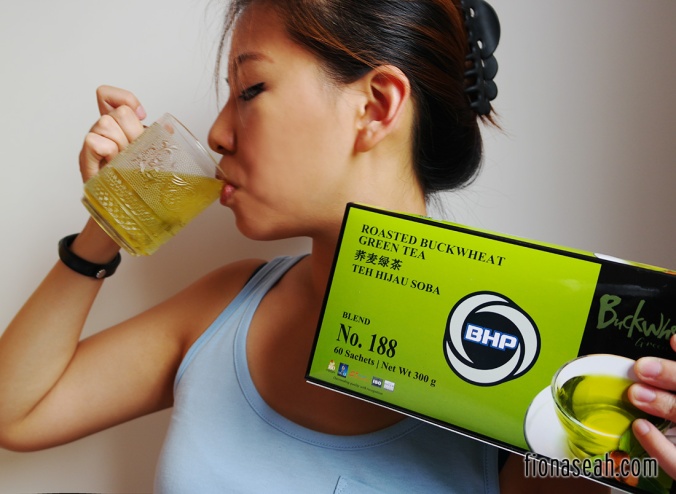 Not a tea drinker? No problem!

On top of the Roasted Buckwheat Green Tea that I have been raving about, there is also Buckwheat Black Coffee for those who absolutely abhor the bitterness of tea (I personally find it acceptable but that’s probably because I’m a tea lover to begin with). and those who cannot live without coffee. It is a blend of Arabica & Robusta coffee mixture and it is so aromatic, you wouldn’t know it’s combined with buckwheat until you’ve tried it. 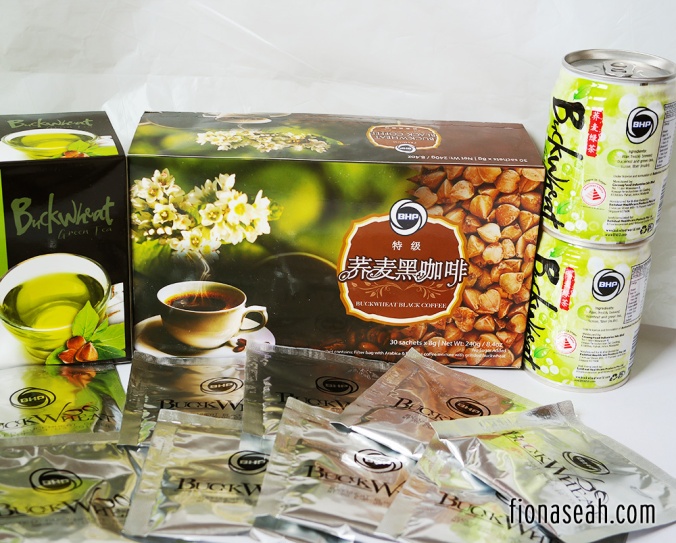 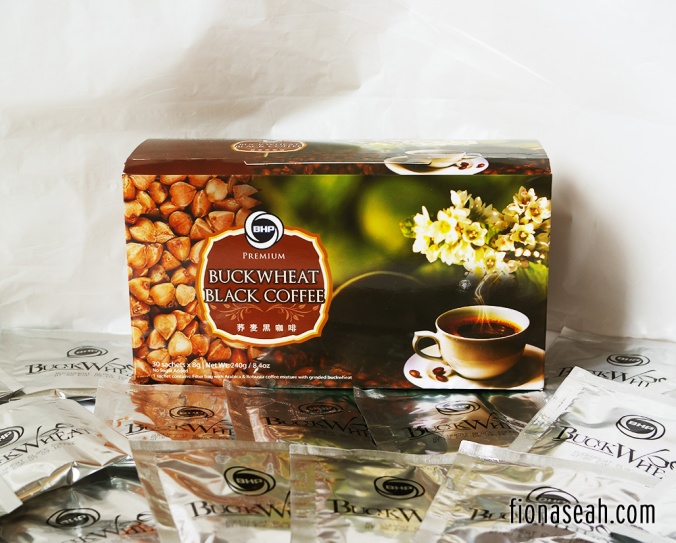 Zero-sugar coffee for the health nut. Also a great start to a healthier lifestyle! 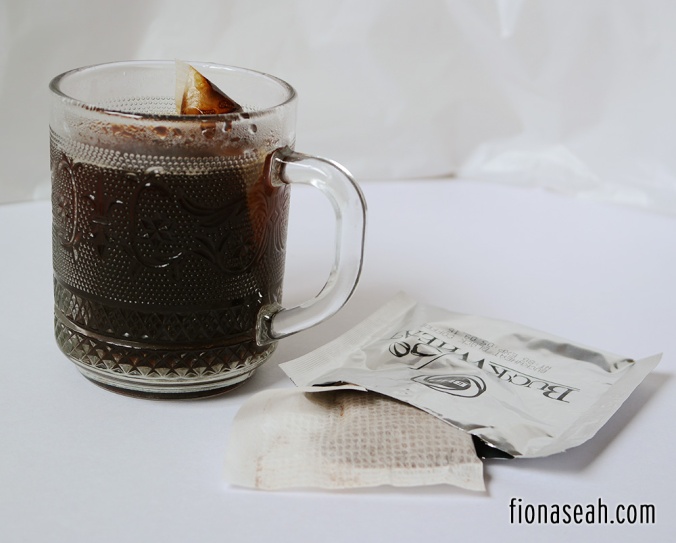 Have no qualms about the taste because it tastes exactly like coffee! A healthier version of coffee to be exact 😉

Enjoy a good cup of hot coffee every morning while benefiting from its health advantages! Isn’t it awesome? 🙂

At BHP, there’s something for everyone – even kids! If you’re worried that your little ones may not like the taste of the hot Roasted Buckwheat Green Tea, it also comes in canned form with a sprinkle of sweetness. You may also refrigerate it for an extra burst of freshness and drink it on the go if you’ve no time for boiling water! 🙂 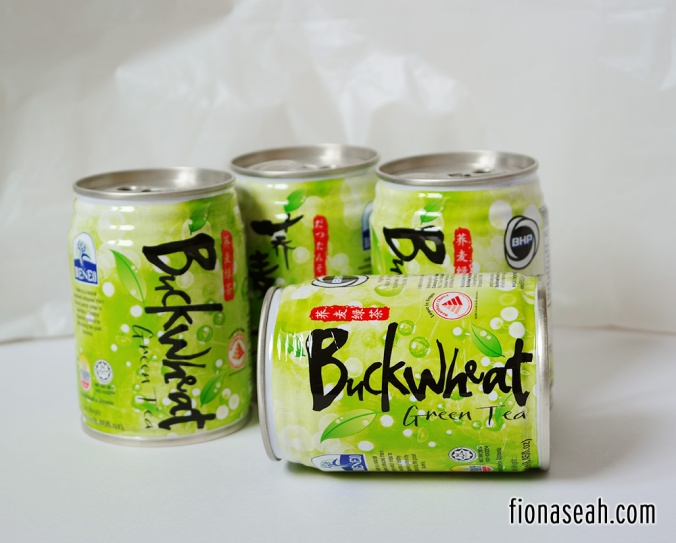 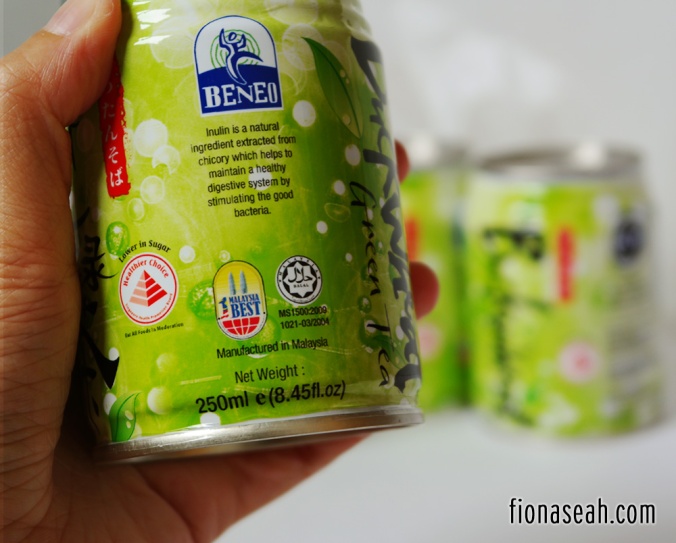 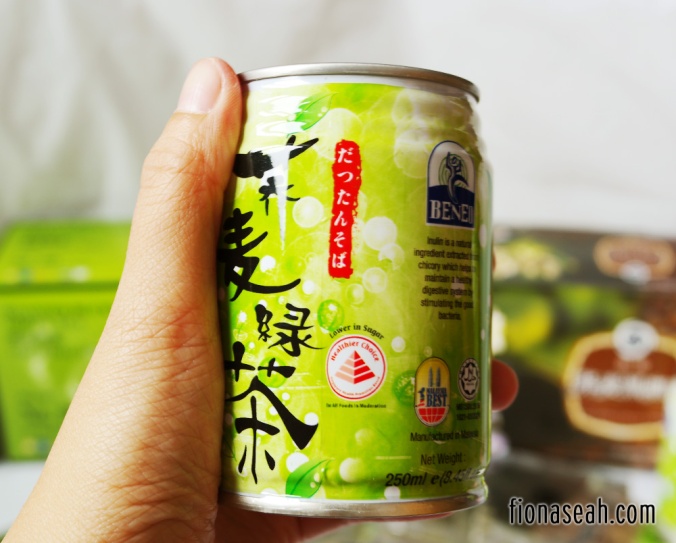 Why you should drink buckwheat?

1. Reduces the 3 ‘high’s – reduces blood sugar, blood pressure and cholesterol. It is ideal for people with high blood sugar.

2. High in antioxidants – the amount in buckwheat is equal or even higher than that of fruits and vegetables

3. Reduces the risk of cancer – especially breast and colon

And also helps in…

This would make a great Father’s Day present as well, don’t you think? 🙂 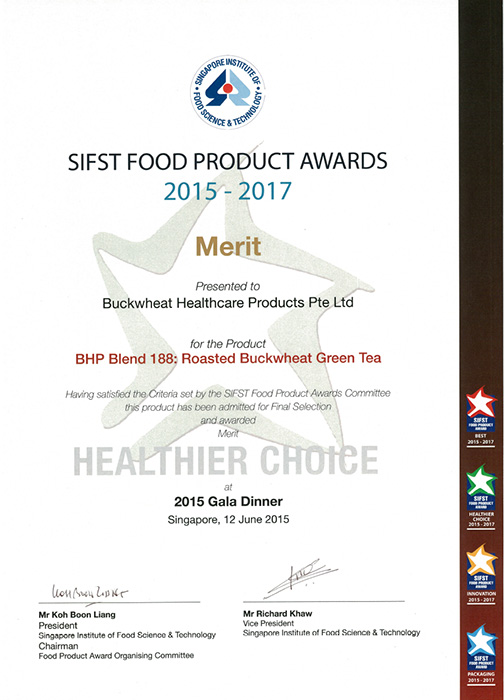 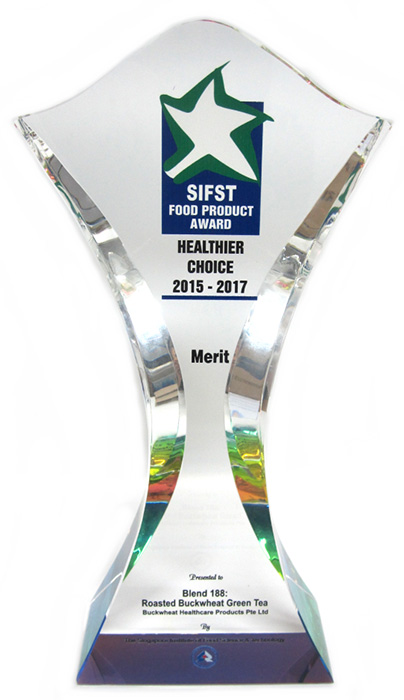 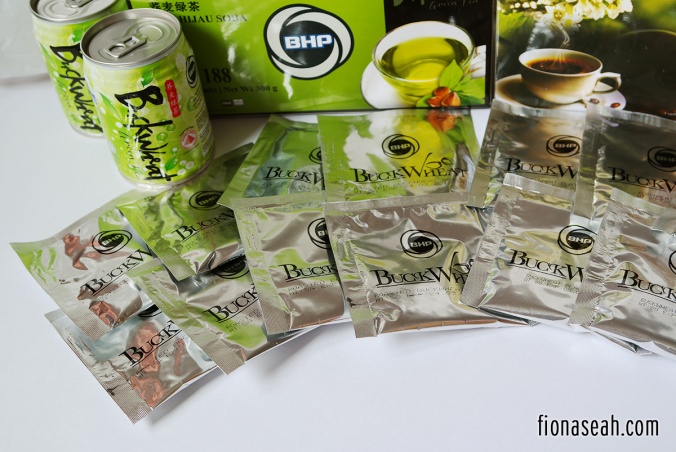 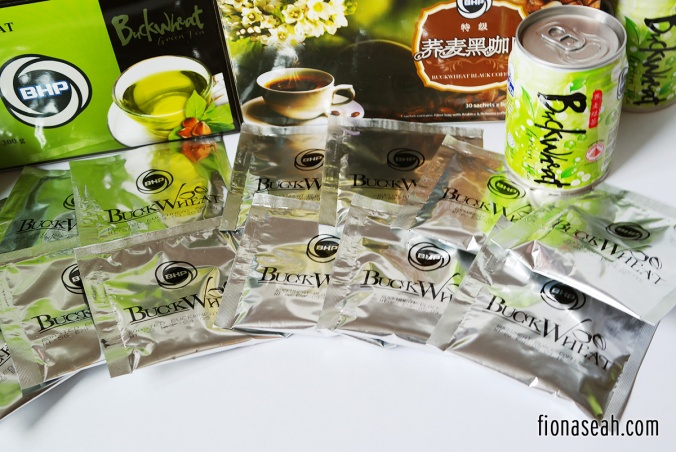 All samples have been given out! 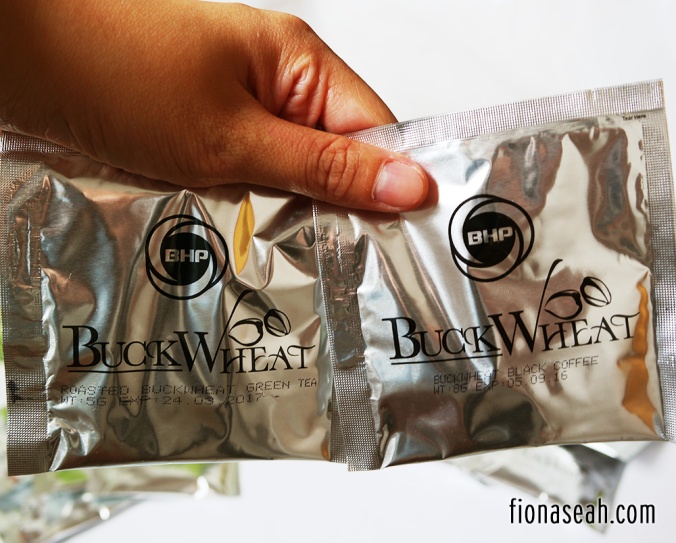 If you’ve tried the samples and are itching to get the full-size product, you would be glad to know that BHP has kindly sponsored me some boxes to be given away to 12 lucky readers! This giveaway is held in celebration of the company’s achievement in the recent Food Products Awards organised by the Singapore Institute of Food Science and Technology. Big congratulations to BHP for clinching the Healthier Choice Merit award for the Roasted Buckwheat Green Tea! 🙂

As product is bulky, self-collection is advised at the following MRT stations: Choa Chu Kang, Bukit Gombak, Bukit Batok, Jurong East, Serangoon, Orchard and Dhoby Ghaut. All are welcome to participate in this giveaway as long as you’re able to meet me at any of the above-mentioned locations! 🙂

UPDATE: First round of giveaway has ended! All winners have been notified 🙂 Thanks for your participation!

Second round of giveaway (even bigger and better!) is open now! Click here to find out more!

Many people have tried the product and witnessed favourable results. What about you? 🙂 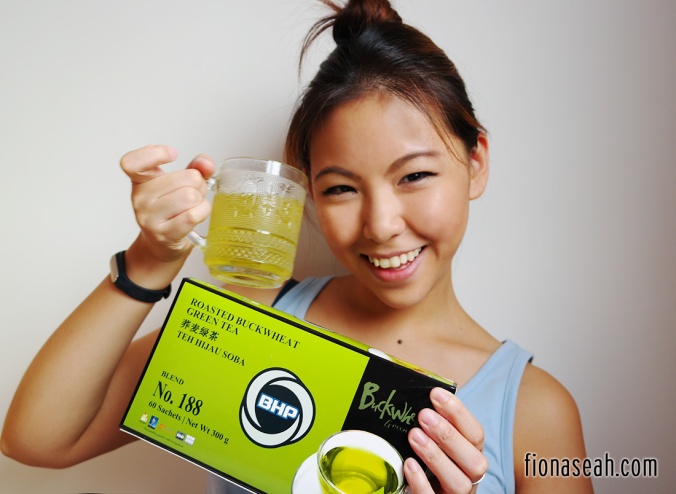 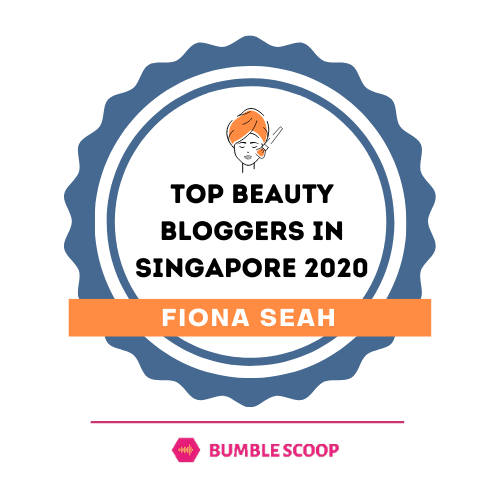