It was pouring heavily everywhere in Singapore last Tuesday, leaving boyfriend and I stranded at Jurong East MRT station. We had planned to have dinner at Jcube (since we were going to catch a movie there later) but the rain had obviously thwarted our plan. Fortunately, the station is directly connected to two other malls so we had the option of dining at either of them. But we eventually chose Westgate because it was the nearest to where we stood and most importantly, it’s a CapitaLand mall where we can earn points for vouchers as we shop! 😀

We walked around the first level in search of an inexpensive place to eat and we stumbled upon a bright-lit and snazzy-looking restaurant complete with Parisian-style interior visible through its full glass window panels. The French restaurant has its capitalised name “PAUL” incorporated in the entrance door. 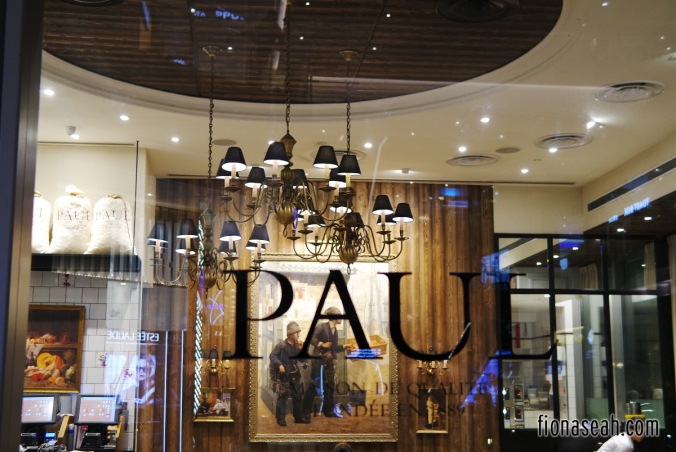 At first glance, the restaurant looks like some upscale restaurant strangely emplaced in a neighbourhood mall. Right next to it is a bakery of the same name. The entire establishment just looks so posh and Parisian, it totally tickled the Francophile in me ^_^ Curiosity prompted boyfriend to take a closer look at its digital menu boards but all he saw was a poster about their rather affordable lunch special (nothing much, just pastries and bread). There was no menu whatsoever at the entrance. But really, how expensive can a restaurant in the heartlands be, right? 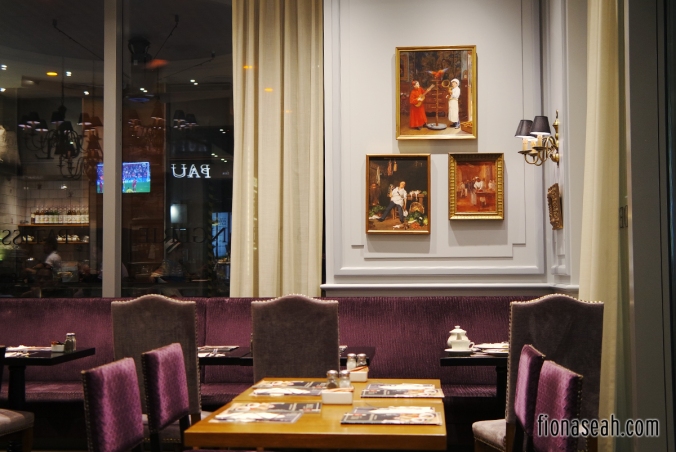 In the restaurant, we noticed that less than half of the tables were occupied even though it was dinnertime. We were then given the regular menu and another for their dinner special. We were pleasantly surprised to see the price of the latter:

WOAH! Exclusive to Westgate outlet only! (They have many other outlets in Singapore as well)

A regular main course alone ranges between S$20-$30++ (perhaps this explains the lack of natural dinner crowd) but you only need to pay a fraction of the price for this Dinner Special! Plus, it comes with brewed coffee or iced green tea. This is such a steal if you ask me! And these are not on the regular menu 🙂

Flipping through the regular menu made us crave for desserts, so on top of the set dinner we also ordered a macaron (wanted Tartelette Citron Meringuee but was told that they didn’t have any Meringuee that day) and Napoleon. We had them before our mains because our growling stomach couldn’t wait any longer. 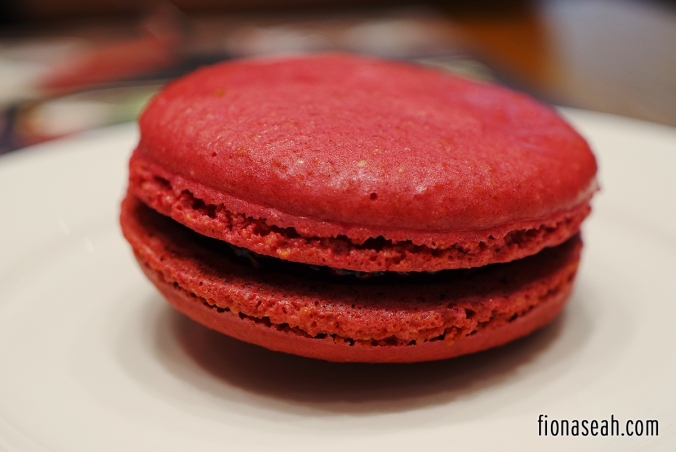 I was initially quite reluctant to order this because I didn’t want to spend S$6.90 on a small dessert like a piece of macaron. But when the macaron came, I instantly understood why it was priced that way. It was huge, probably 3 times the size of a regular macaron. I had strategically place my cup of iced green tea in the background of the first picture to show how big the macaron really is.

Ever since Canelé pulled down its shutters permanently last year, I had been going to Antoinette (opened by Chef Pang who spearheaded the creation of desserts at Canelé) to get my macaron fix. But to do that I’d have to travel to the nearest outlet at Orchard. Well, not that it’s very far away from where I live but it’d be even better if I can buy equally good macarons in the west because that’s ultimately where I live, work and study. With PAUL’s macarons, I can safely say that it’s possible now! The macaron I had was just.. divine. It is sweet (some may find it too sweet but I like it the way it is!) and has a really chewy and fluffy centre. It’s not too dry and can be nicely cut in half with minimal crumbling. 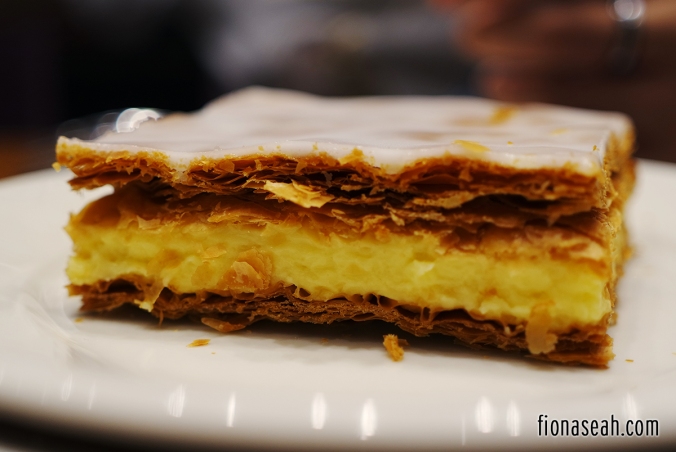 The Napoleon is one of PAUL’s signature desserts and it got me hooked at first bite. It’s a crispy golden puff pastry filled with vanilla-flavored pastry cream and topped with a light apricot glaze. It’s simply phenomenal and I really enjoyed the flaky and crusty texture. The pastry is sweet too and very, very addictive. A must-try when you’re at PAUL!

After a rather long wait (would probably feel like eons if not for the desserts to keep our mouth busy), our mains were finally served.

Pardon my poor photography – these pictures really don’t do the dish justice. It may seem like a small portion here but in reality it’s many thick slices of cod fish (?) stacked on top of one another. Really value-for-money. I almost couldn’t finish it and had to share some with boyfriend who wished he had ordered this instead of the braised beef. The fish was very tender and fresh, but a tad salty which can be salvaged with the spicy sauce (no, not spicy at all!).

The beef was cut in thick chunks and were relatively soft but in terms of flavour, this pales in comparison with the grilled fish dish. I felt that it was a little bland and the portion was also noticeably smaller so it wasn’t enough to satisfy boyfriend’s hunger. Hahaha. The bread was top-notch though!

Our total damage was $50.96 including all prevailing charges. It would be waaaay cheaper if we just ordered the set meal alone (less than S$35) but even so I thought I was paying less for high quality food 🙂 It’s an offer not to be missed! Unfortunately this deal is only good until 31 May. Hopefully the restaurant comes up with a new Dinner Special menu next month!

And that’s about it for PAUL. Do stay tuned for more food updates 🙂

Inspirations only come to me at night, so here I am, back to tempt you with more food pictures at this unearthly hour! (It’s almost 3am in Singapore FYI)

After much dilly-dallying, I finally got to meet my girls from Folks Like Us for lunch on Tuesday at this quaint little hidden treasure at Ann Siang Hill which Atheena was raving to us about. It also marked my first trip to Ann Siang Hill because I always had the impression that it’s very inaccessible (and that there were more bars than anything else, thus it’s also very popular spot for expats). But now with the newly built Telok Ayer MRT station, you can easily get there within 7 minutes. 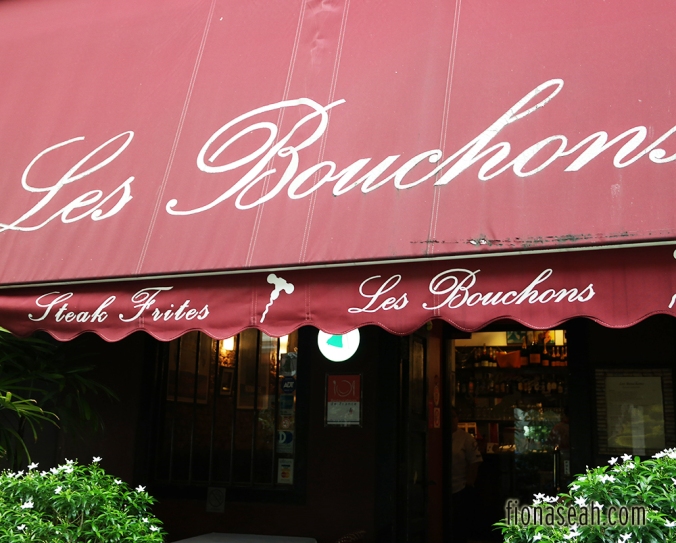 Reservation is necessary due to very limited seating at Les Bouchons. Upon entering the French restaurant, you’d be surprised at how small it is. It was only able to fit 6 tables at most but there were more (probably 4) tables outdoors. I had to squeeze through a tiny gap between two tables to get to my seat. But despite its size, the place was actually pretty cozy. It’s not some kind of high-end restaurant where you’d feel pressured to put up a demure front because everyone would be dressed casual and chatting so heartily during meal.

But that does not mean that the food is going to be of low or mid-range standards.. well, maybe except for the complimentary bread basket.

The bread came tough and stubborn so we had to request for it to be heated to make it softer for consumption. The service staff gladly complied and even added more bread to our basket. Thumbs up for great service!

At Les Bouchons, you can expect to find standardised prices for their entrées and plats (main course). All entrées are priced at S$18++ while plats (including their Ribeye and Sirloin Steak) are at S$38.80++ each. Fairly reasonable, I’d say! A meal there would definitely not burn a huge hole in your pocket.

For starters, I got myself Burgundy Escargots with Garlic Butter. 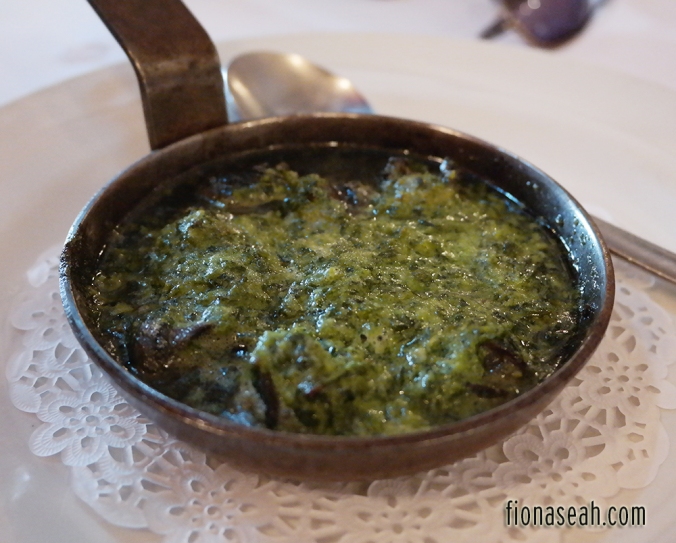 The sauce was a tad oily but it was actually quite delicious! The amount of herb in the garlic butter was just right, and the sauce also made good complement to the free bread. The 9 pieces of escargot were served plucked out from their shells. They were fleshy, properly salted and well doused with the butter. Classic!

For the mains, I had Grilled Rib Eye Steak with “Vigneron” Butter.

The mustards for the steak! Among them were Dijun and Whole Grain. I love the Whole Grain one the most!

All of us ordered the same food. Hahaha

All mains come with a huge serving of salad (as can be see above) and free flow of home made french fries. The salad was made very crunchy by the generous amount of walnuts in it. The fries were simply AMAZING. I ate every single piece of it and I wished I had room for more. Basically, everything on the plate was in large portions, even the steak itself. It was so unusually big that my friend couldn’t finish hers! So ladies, if you’re going to dine at this restaurant, be sure to bring a hungry male friend along to finish the leftovers. Hahaha!

Anyway, the steak wasn’t hot enough for the butter to melt instantly. Hence I had to manually spread the butter all over the steak. Temperature aside, the steak was actually grilled to perfection and it had the right amount of saltiness. Mine wasn’t too fatty and I could practically eat the entire steak without any difficulty.

Needless to say, this is also extremely value-for-money! 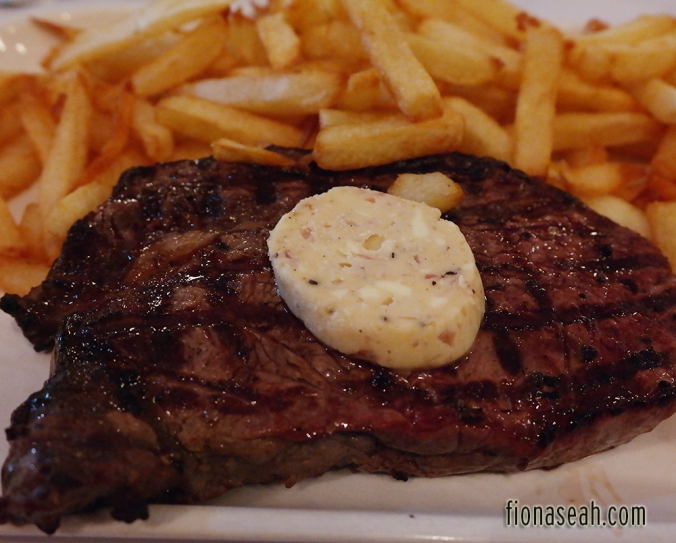 Because it deserves a close-up shot. 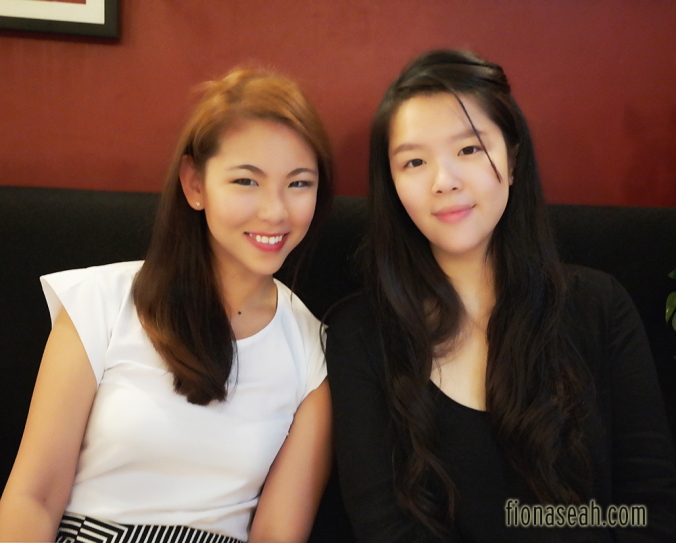 After the main course, we shared a dessert because the steak was an overkill. We ordered Peche Melba, a vanilla ice cream with poached peach, raspberry coulis and whipped cream.

The vanilla ice cream was very creamy but not too sweet. The poached peach was ripe and refreshing. This dessert was a perfect ending to our enjoyable meal. I’ll try their Crème Brûlée instead next time 🙂

Great groupmates and friends from my university! We have another member who had already returned to the U.S.

The meal in general was really good and the portions were plentiful. But this place is so underrated! It’s probably one of the rare French restaurants that don’t charge exorbitant prices for their food. I only spent about S$67 after including all the relevant taxes. That’s equivalent to the price of a piece of steak elsewhere and it may not necessarily be as awesome as the one I had at Les Bouchons. I will bring Bf along on my next visit and I pray hard that it will not be swarmed with even more reservation calls after this post.