As much as I love to eat, being a non-driver has made me quite reluctant to travel to eateries that are inaccessible by train (which is my main mode of transport), and even more so if I have to walk under the scorching heat of the sun to get there. Therefore, even though I get tempted by enticing food pictures from cafes on Instagram all the time, I still hardly cafe-hop since most of the new startups are normally hidden in some secluded corners of Singapore.

However. lodging at Naumi Liora for our staycation had given me the opportunity to explore inconspicuous eateries in Chinatown area which I had previously found to be inconvenient by public transport. In fact, there was already one right on our doorstep!

Called Three Buns, it is a gourmet burger joint from South Jakarta and the brainchild of the PTT Family (I’d think PTT stands for Potato) which had already spawned 3 highly successful dining establishments in Indonesia namely Potato Head and Potato Head Garage in Jakarta, and Potato Head Beach Club in Bali. Three Buns arrived on Singapore’s shores some time in 2014 under the umbrella of the Potato Head Folk group and has been a pretty big hit among the nightlifers and office workers looking to unwind with some burgers and cocktails after a long day on the job.

View from our hotel lobby

Currently occupying the first two levels of the iconic Tong Ah building, it has its takeaway counter on the ground level and the dining area on the second. A lounge bar (Studio1939 Lounge) and a rooftop bar (The Rooftop Garden) – also part of the Potato Head Folk – sit on the third and fourth floor respectively.

The signature logo of Three Buns is the head of a Bulldog, inspired by a staff member’s bulldog which frequented the PTT Family office grounds in Jakarta 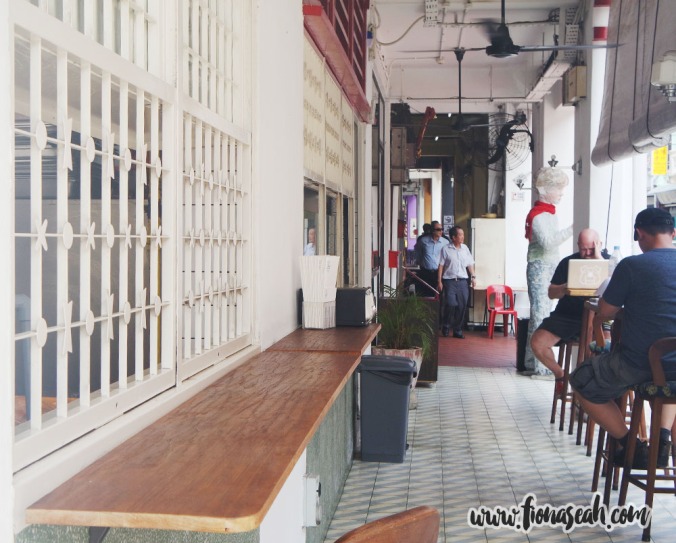 Ground floor of Three Buns in the day 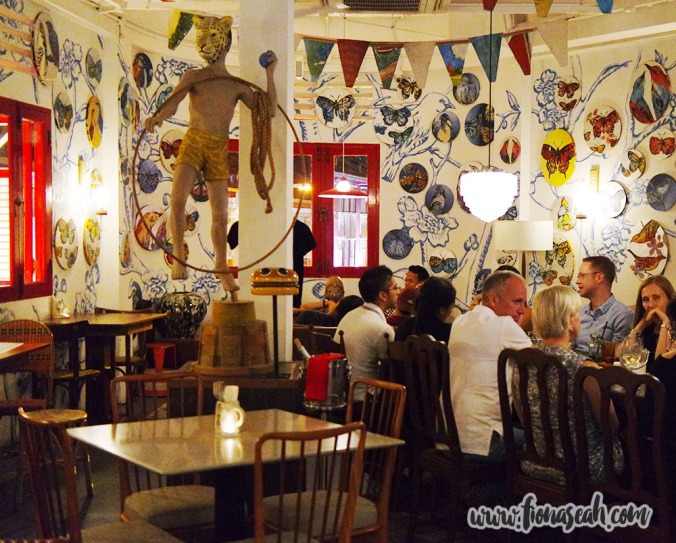 Dining area on the second floor at night

The mastermind behind the recipes of burgers is actually Chef Adam Penney from London who also helmed the kitchen of the widely acclaimed Patty & Bun burger restaurant, thus the expensive price tag for every burger on the Three Buns menu. Boyfriend and I only decided to dine there on the second night of our staycation (after much persuasion by him) because I was put off by the price. Be prepared to spend at least S$20 for a single burger and around $50 for a complete meal per pax.

The restaurant was a little dim at night so please pardon the poor lighting.

Served in the most unpretentious manner possible, these eggs were placed in a plain paper cup with no garnish whatsoever to liven up the dull presentation. Everything seemed to be true to its description except for the flavour. The eggs were nice and soft but they were so goddamn sour that it left my tongue feeling severely blistered for a day. I don’t know what that was but it tasted a lot like a truckload of vinegar. The sourness was so overwhelming that it kinda engulfed everything else, making it a struggle for us to finish the eggs. And S$10 for a few pieces of quail eggs soaked in beetroot juice? *scoffs* That money is better spent on something else on the menu so no, will not recommend this to anyone at all.

One of the cheapest sides available, the shoestring fries came in really small quantity that were gone in a flash. Oh well, at this point I’ve come to accept the fact that everything there was pretty much overpriced. But the fries were thick, crispy and salty enough for my liking. 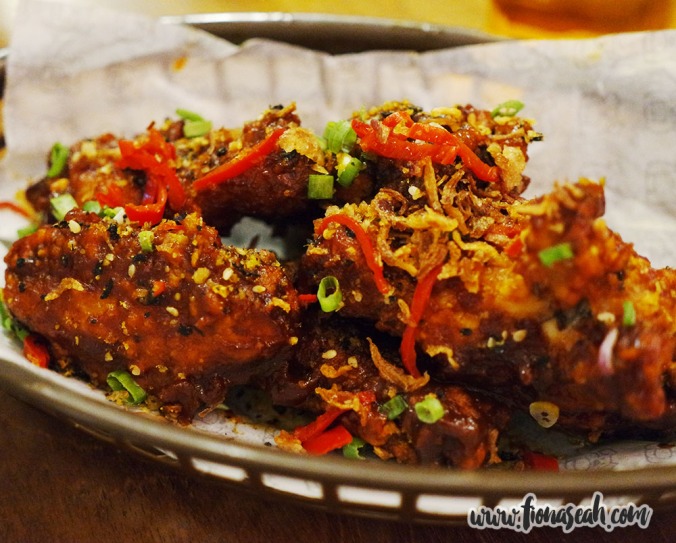 I am bewildered by the pricing system at Three Buns. Isn’t it strange that these wings actually cost the same as the awful quail eggs? But unlike those eggs which totally didn’t justify the price, these wings were absolutely delicious! Topped with tiny chilli strips, green onion and bits of fried onion, they were sweet with a hint of spiciness. Love the distinctive crunchiness as well, which was the result of double frying. Brilliant! 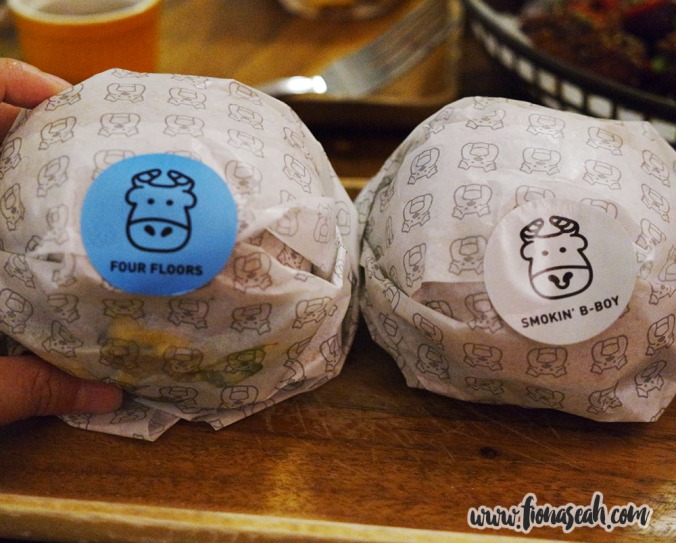 Beef burgers are a specialty at Three Buns with the beef patties cooked medium unless otherwise requested. Chicken, lamb, crab, fish and vegetable (for vegans) burgers are also available on the menu.

The flavours were great because of the robust mixture of the beer and other sauces which trickled down my hand with every bite. Bacon and crisp onions were added to give the burger an added crunch but the patty was a little dry on the whole. Presentation-wise, it looked like any average and uninspiring beef burger, and messy, so to speak, because of that squashed bottom bun and excess piece of burnt cheese sticking out in the middle.

Prices for the burgers seemed to have been adjusted (or rather, inflated) to exclude the 7% GST and 10% service charge. From past reviews on other food blogs, the Smokin’ B-Boy used to be $28 nett but now, after factoring in all the additional charges, it amounts to almost $29.50. Nah, not worth it if you ask me. I would rather pay an extra dollar to get… 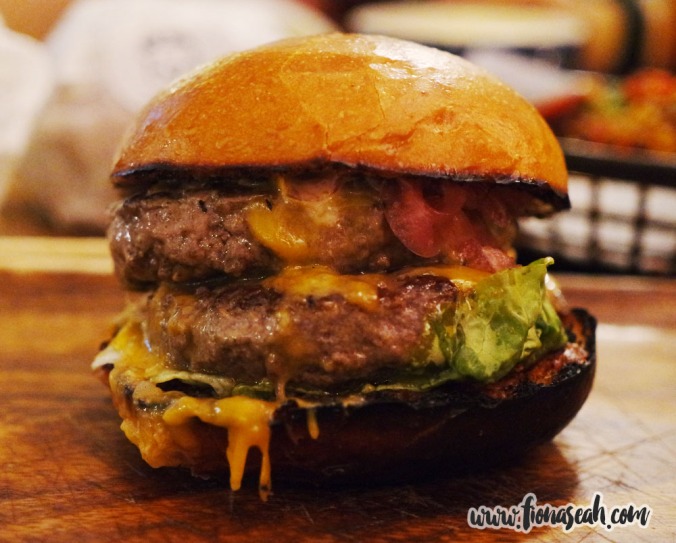 Two slabs of thick and succulent beef patties smothered in the most sinful combination of savoury sauces, layered with crunchy vegetables and an overflowing heavenly cheese, and sandwiched between two fluffy buns… I was in total awe. The burger was huge and packed with patties that were delicate and soft to the tooth. But unless you request for the burger to be sliced in four pieces, you would definitely need a big mouth to take a bite out of this burger without messing up the alignment.

A complimentary wet wipe is provided to clean your hands that were soiled with sauces while you luxuriate in the thick burger but it’s always good to prepare yourself with more in case one isn’t enough.

In general, everything – perhaps except for Four Floors – at Three Buns is pretty overpriced. The Smokin B-Boy was honestly just a better-than-average fare of its kind which I didn’t think warrant the hefty cost. The price of the nibbles (where the quail eggs are classified) are, needless to say, daylight robbery. But that’s just how I feel.