It’s the time of the year again when the familiar pungent smell of durians fills the air of Geylang and many neighbourhood centres. Lovers of the world’s smelliest fruit crowd around durian stalls island-wide, looking to sink their teeth into the creamy, sweet (or bitter, if you’d like it to be) and fibrous flesh. Many businesses have also joined in the craze by incorporating the king of fruits into their menu – typically in buffet style – to entice durian lovers like myself who want to try something different. However, prices for such durian feasts tend to be on the high side so I had to narrow my choices down to one. And after much deliberation (RWS’ durian buffet looks really tempting too but is unfortunately way beyond my budget), I decided to give Durian Fiesta at Goodwood Park Hotel a go!

Incepted in 1983, the Durian Fiesta returns annually to much fanfare. This year, to commemorate Singapore’s 50th year of independence, it has also introduced 6 new creations made with D24 durians to the line-up of the durian-centric goodies, twice as many as usual. They are the Instagram-worthy Durian Rainbow Ice Cream Cake, Durian Carrot-Walnut Cake, Mini Durian Chocolate Wafer Rolls, Durian Macarons, Durian Egg Tartlets and “Mao Shan Wang” Horn which can be purchased at the hotel’s Deli starting from 16 March 2015.

The highly-anticipated dessert buffet with durian pastries was only available from 30 May during dinner and lunch at the Coffee Lounge. It was so popular that tables on the first week were fully snapped up when I tried to make my reservations. I had to wait ’til the following Friday to successfully get one

For S$35.80++ per person (or top-up S$28.80++ for Dessert Buffet with Durian Pastries with any a la carte main
course order), patrons would be treated to a nice selection of food at the buffet table, including some of the new creations that can be quite expensive if bought à la carte (à la carte prices in brackets). 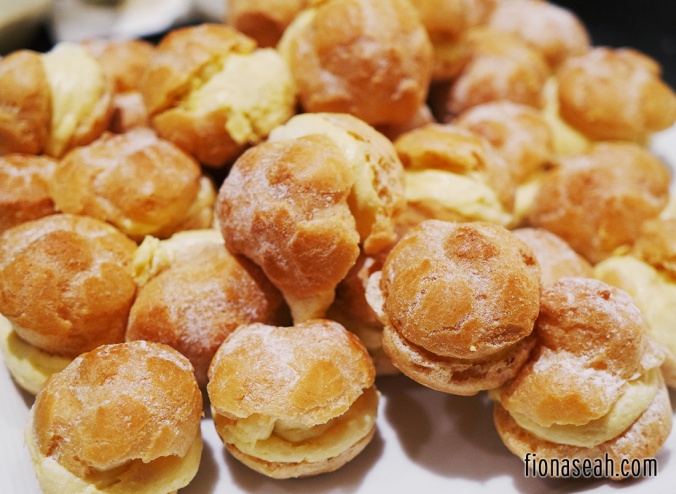 I loved the thick and intensified durian puree and it’s such a fun pastry to eat because you can easily pop a few of these into your mouth due to its small size! But I felt that the puffs would be a lot nicer if they were refrigerated. Those I had were kept in room temperature for some time so it kinda lacked the shiok factor. 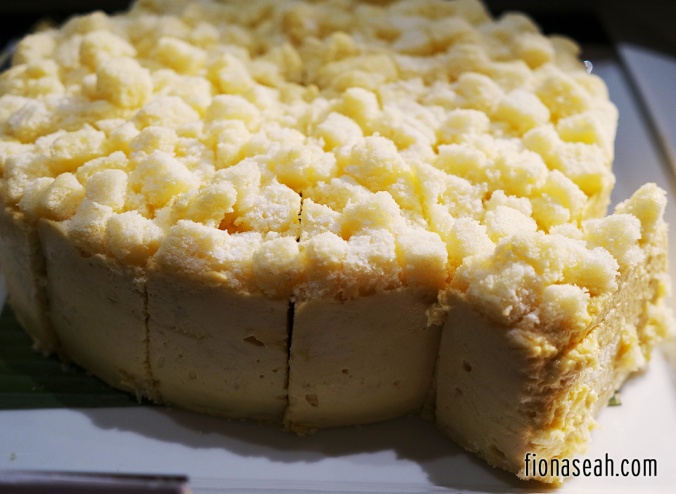 The star that launched the inaugural Durian Fiesta in 1983, this legendary cake is ultimate indulgence with generous lashings of pulpy D24 durian mousse.

Probably the main highlight of this buffet, the cake scores high on presentation (love the little cubes of durian pastry studded on it) and taste. Described by my boyfriend as thick, moist and delicious, the cake was 100% pure rich durian which can be quite gelat (Singaporean slang for flavour overdose caused be having something overly sweet, salty, spicy and etc.) after a while so unless you’re obsessed with durians, you wouldn’t want to go beyond one slice. 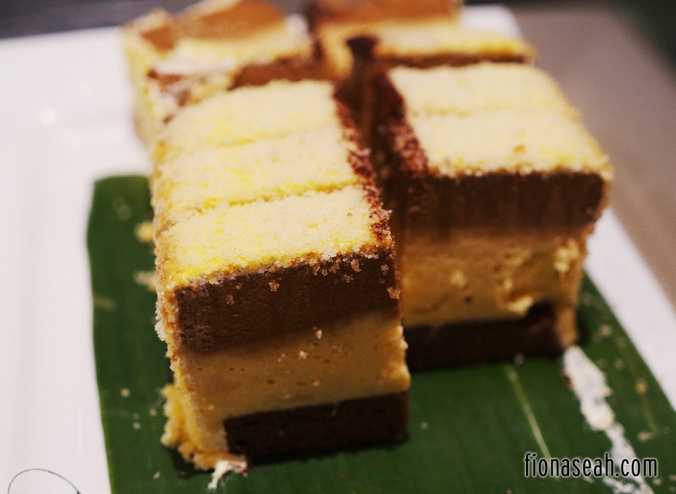 Back for the first time since its inception in 2011, this alluring cake is a 30cm-long stack of cappuccino
mousse, lush durian mousse and chocolate sponge ensconced in yellow-gold crumbs of vanilla sponge. 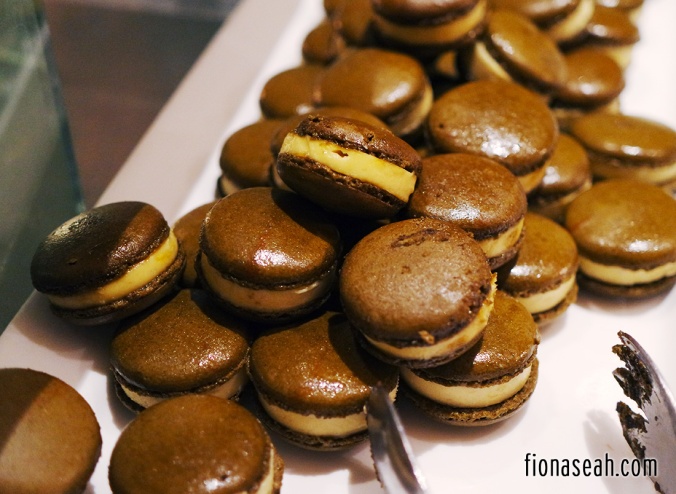 As a macaron lover, I was really looking forward to the durian macarons at the buffet! But they left me rather disappointed because I didn’t think that the (mild taste of) dark chocolate complemented well with the durian center. Boyfriend, on the other hand, felt that he was overdosing on sugar. You know, as boring as it may sound, I seriously wouldn’t mind if the macarons were made entirely of durians. Wouldn’t that be awesome?! 🙂 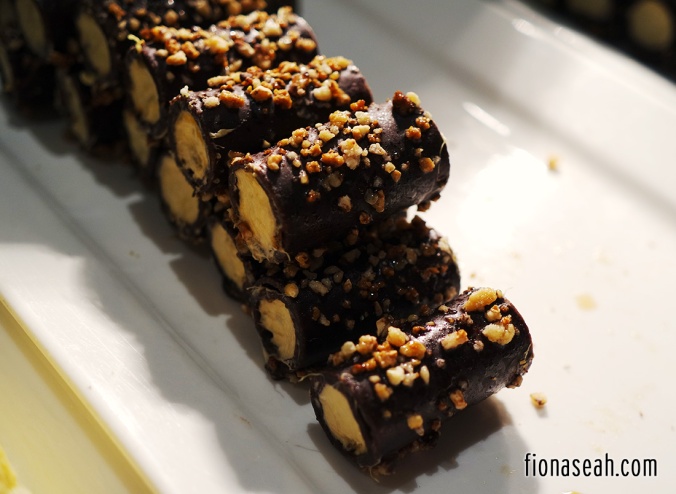 Delicate in size but brimming with flavour, these thick wafer cylinders curled around pulpy durian cream are blanketed in dark chocolate and finished with chopped nuts for extra crunch. 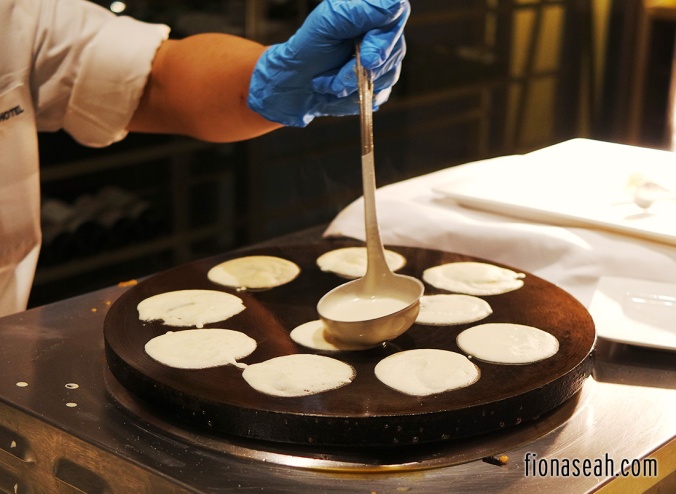 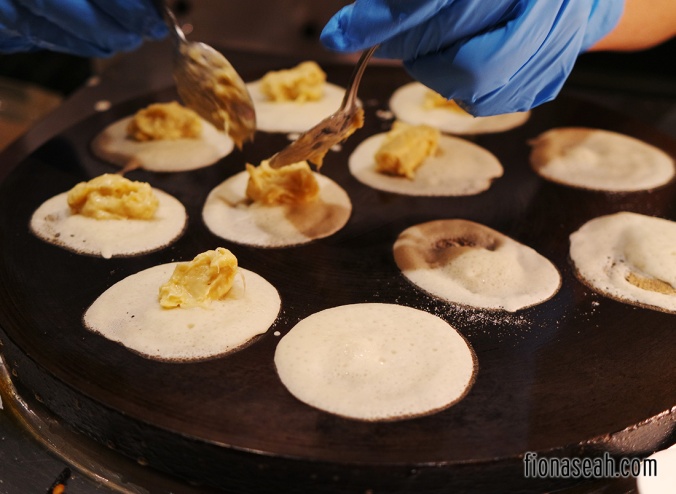 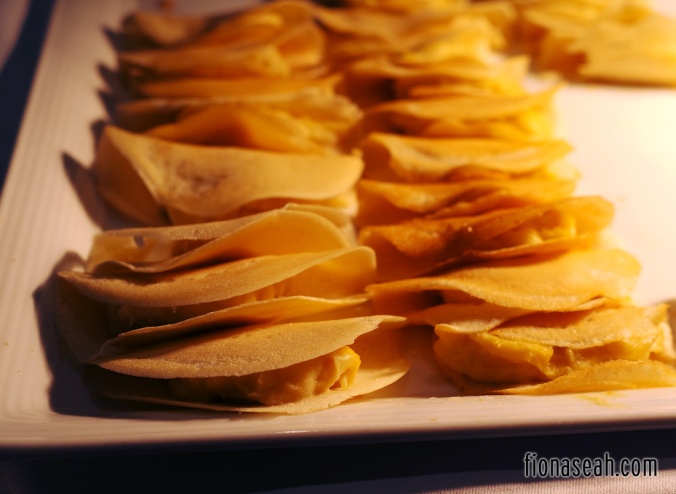 The mini durian crêpe was prepared in full view of the patrons and regularly replenished because they ran out so quickly. But we personally felt that they were nothing short of ordinary. The palm-sized crêpe was thin and not crispy at all (the chef could perhaps leave them on the pan for a little longer). Its only saving grace was the generous amount of durian puree wedged in the middle.

The above pastries pretty much constitute more than three-quarter of the durian dessert buffet. As you can see, not all the much-hyped new creations were included in the buffet. The food choices were indeed very limited too (in fact I was kinda astounded to see the limited selection of food the first time I entered the restaurant) and I wouldn’t recommend paying close to S$40 (seriously, with that kind of price for a substandard buffet, I’d rather spend it all on a few kilograms of 红虾 durians) for it despite the presence of regular sweet treats to make up for the shortcoming. Don’t expect to leave the place with a satisfied tummy if you’re merely there for the dessert buffet. 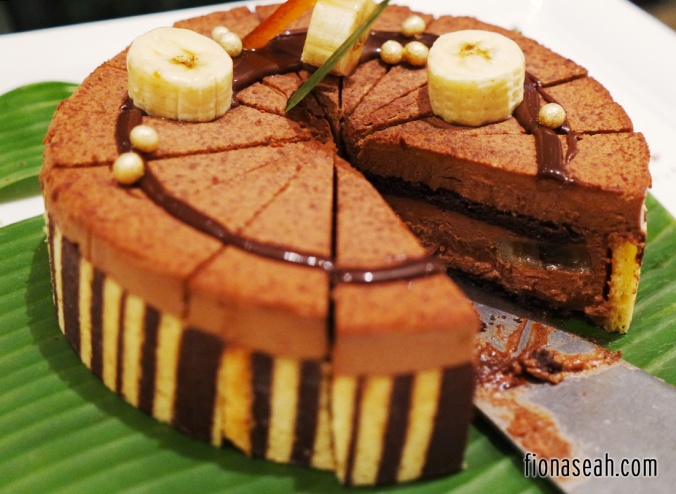 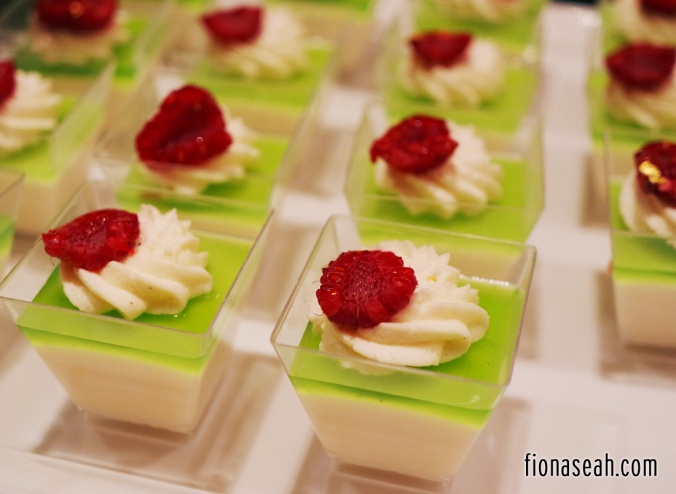 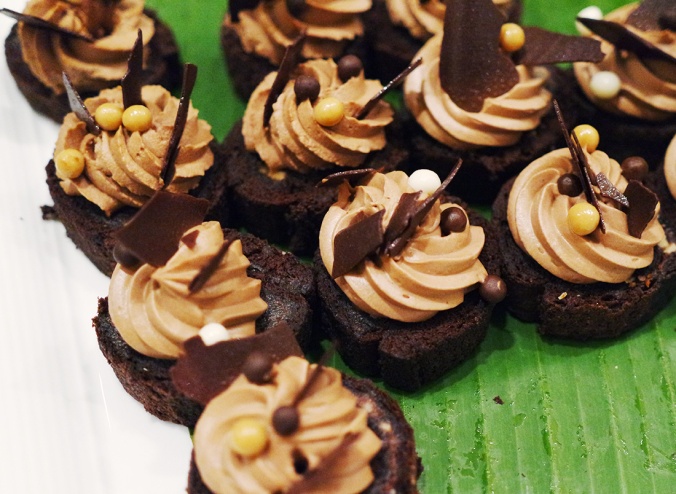 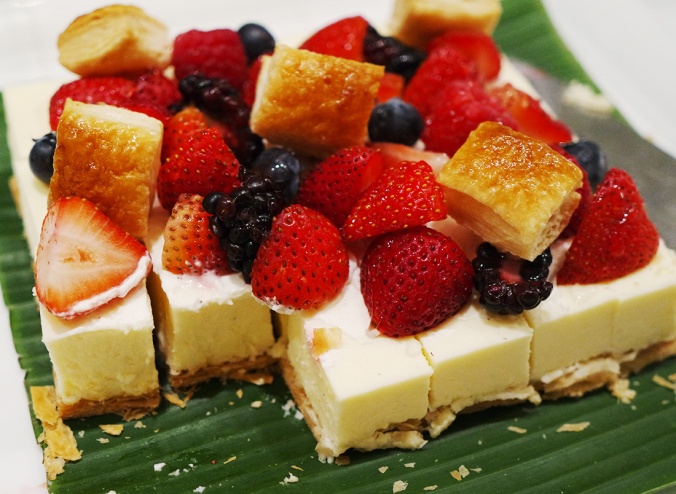 Cheesecake, if my memory doesn’t fail me. It’s actually not bad! 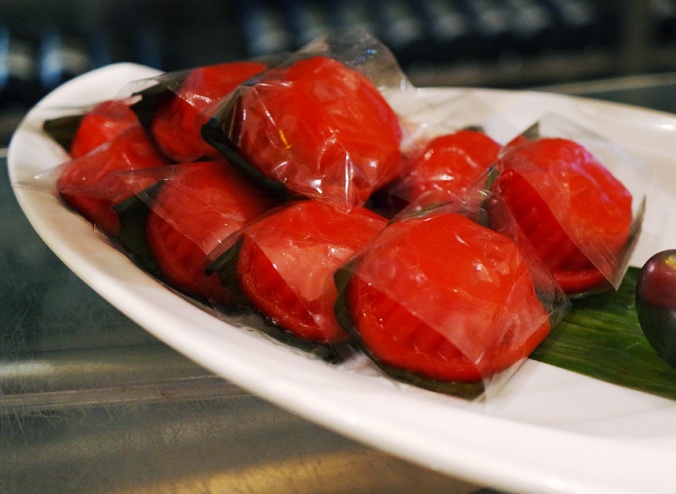 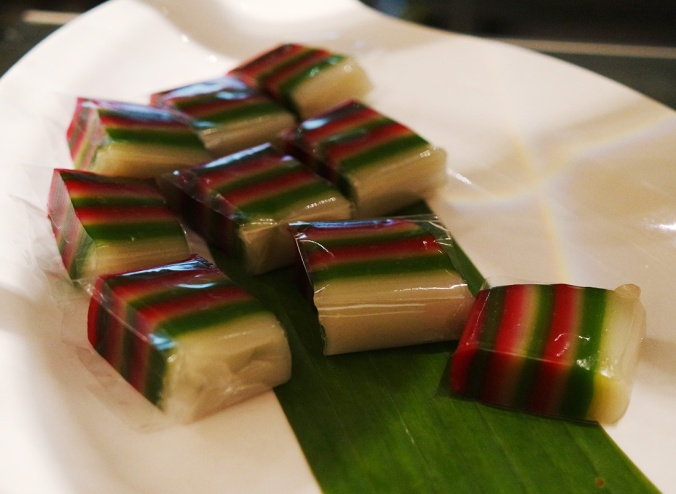 Knowing that the dessert buffet wouldn’t fill us up, Boyfriend and I had opted for the Taiwan porridge à la carte buffet which is also inclusive of the dessert buffet with durian pastries. Although slightly more costly at S$49.80++ per person, the price difference of S$14++ gives you full access to free flow of sweet potato porridge and classic dishes so that you can eat to your hearts’ content. Furthermore, each guest also gets to enjoy 1 serving of D24 Durian Ice Cream with Rainbow Bread, created in celebration of the nation’s golden jubilee. Without a doubt, this buffet steals the limelight with its much wider variety and bigger portions of food as compared to the dessert buffet and it would be foolish not to settle for this buffet option when you’re there. After all, it’s what Goodwood Park Hotel is well-known for!

All dishes were freshly prepared in the kitchen and served to our table. Here’s what we ordered: 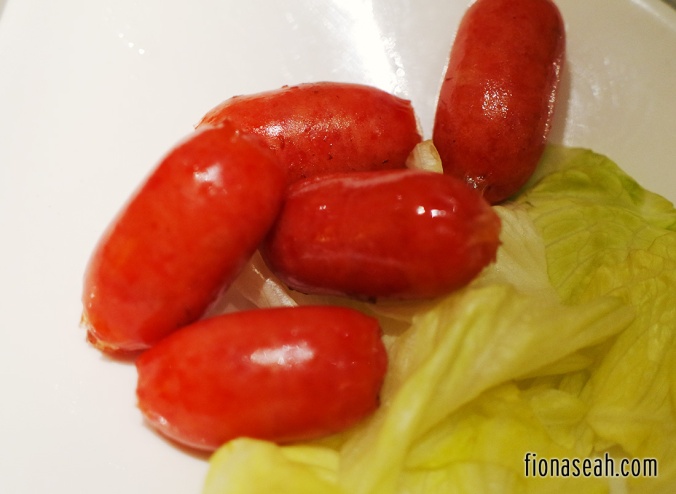 Apart from Taiwanese sausages, there were also Salted Fish with Salted Egg, Baby Squids in Sweet Oyster Sauce, Fried Taman Fish with Sesame Seeds and Shredded Bamboo Shoots with Chilli Oil that you can order for appetisers. 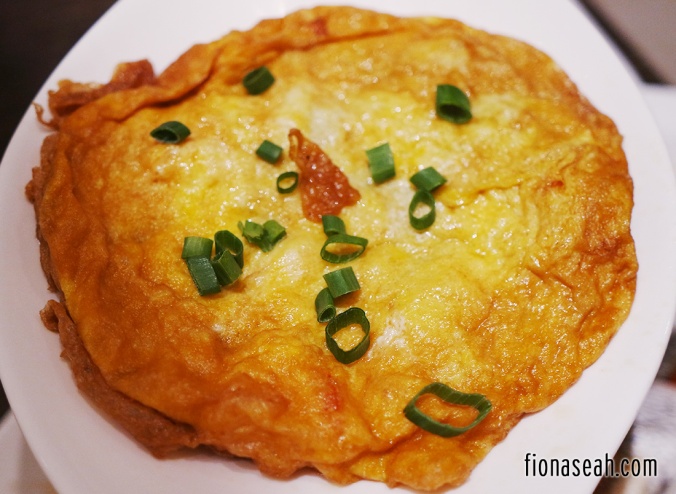 Fried Omelette with Prawns and Onions 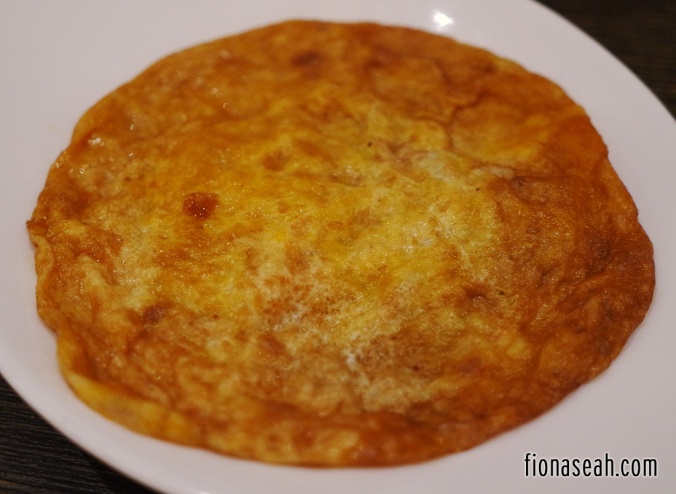 “When in doubt, choose both.” Hence, we got two different types of fried omelette because we simply couldn’t choose. Both were good and loaded with generous servings of prawns and chye poh. The omelette itself was thick and perfectly golden too! 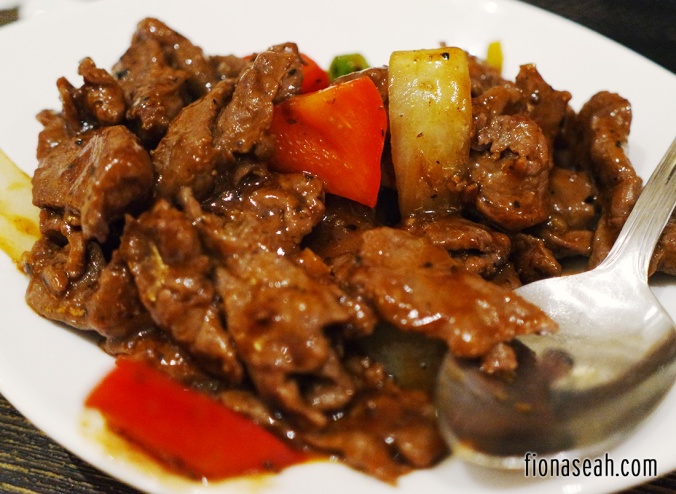 Tender and tasty, the beef slices were sublime with the right chewy texture and I enjoyed it thoroughly. It would be better if more black pepper was sprinkled onto the beef though.

Another beef dish on the menu was Wok Beef with Spring Onions and Ginger which sounds absolutely mouth-watering, I know. I would order that as well if my stomach hadn’t filled to maximum capacity. 😐 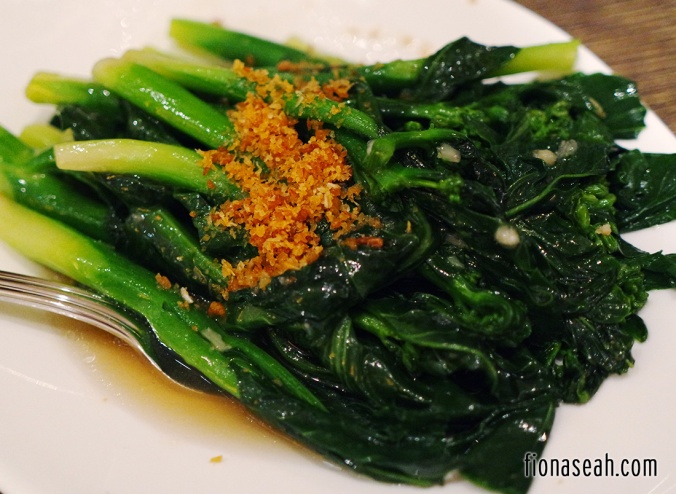 I ordered some greens to complete the meal and to hopefully relieve some of my body heat (from eating too much junk food recently). The Kai Lan was fresh and super crunchy. I loved it so much that I even called for a second serving.

Not a fan of Kai Lan? No worries. There are also other vegetable dishes to choose from including Stir Fried Broccoli with Garlic, Stir Fried French Beans with Dried Shrimps, Stir Fried Bean Sprouts with Salted Fish, Stir Fired Eggplant with Minced Pork and Stir Fried Kang Kong with Sambal. With so many varieties to choose from, you’re bound to find something you like or excites your palate 🙂 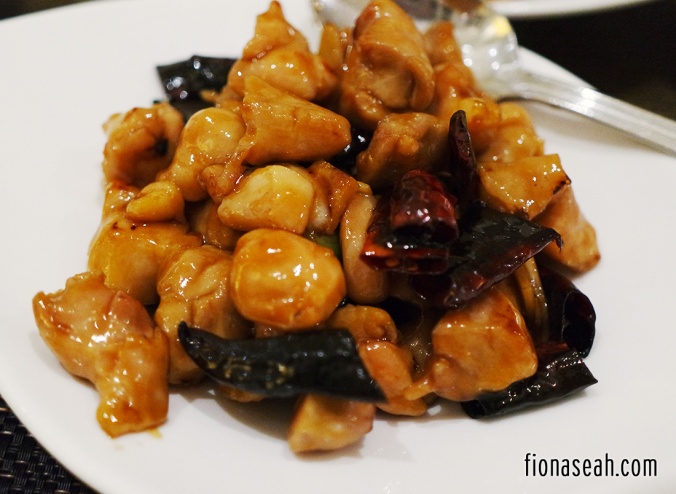 Soft and savoury, the diced chicken glistened with the tangy coating sauce. The dried chilli also gave it an added tinge of spiciness. Yummy! 🙂 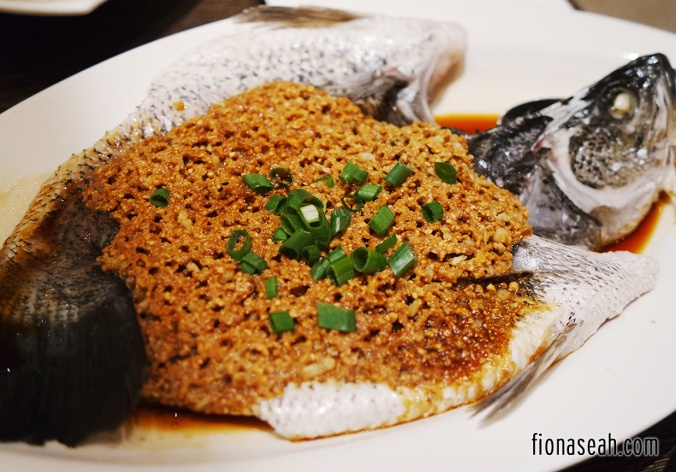 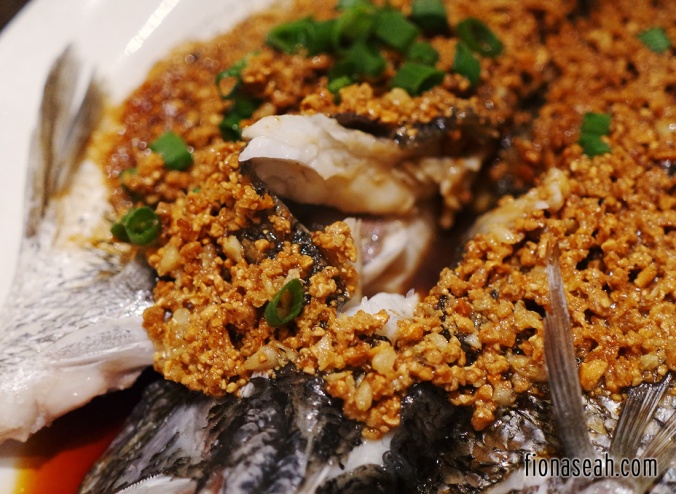 The highlight of the meal, we had our money’s worth out of this steamed Sea Bass. The fish was reasonably big for 2 people and had incredibly fresh and tender flesh. The layer of fried garlic enhanced the overall flavour of the fish and gave it an extra crunch (saying this even though I absolutely detest fried garlic because I accidentally took a bite of the fish with some fried garlic and actually liked it!).

Unfortunately, fish dishes are only limited to one order per table so we didn’t get to try the other fish item on the menu – Deep Fried Pomfret with Black Soya Sauce. However, you get to enjoy unlimited serving of the Sautéed Prawns with Dried Chilli which is also on the seafood menu.

As we were already partially satiated from the durian buffet, we didn’t have the stomach space for more porridge dishes such as beancurd (boyfriend’s favourite). Beancurd lovers would be ecstatic to know that there are 4 different types of beancurd dishes to choose from namely Chilled Beancurd in Japanese Soya Sauce and Pork Floss, Braised Beancurd with Minced Meat, Braised Beancurd with Chicken and Salted Fish and Home Styled Tofu.

Towards the end of the meal, we were served the D24 Durian Ice Cream with Rainbow Bread but to our disappointment, it turned out to be entirely different from what we had expected. 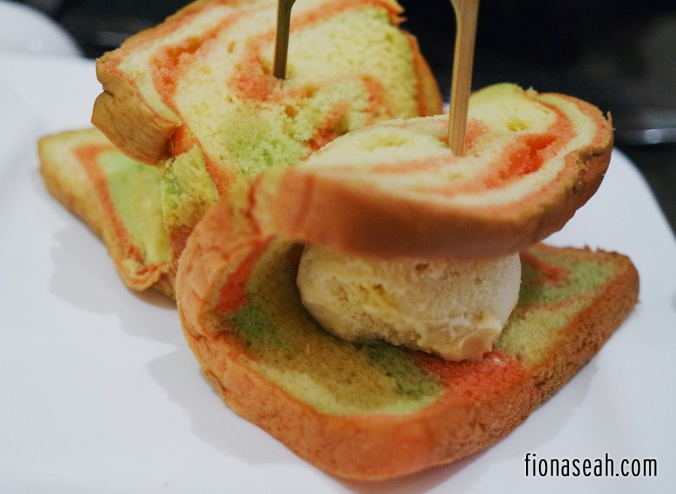 ..when we were actually expecting this: 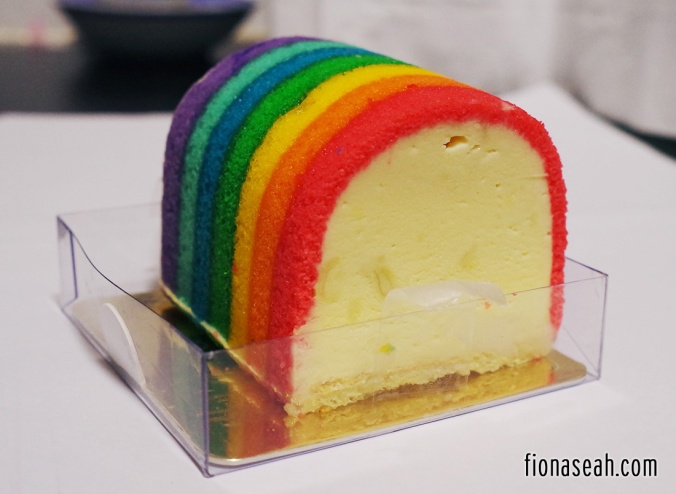 Imagine our surprise when we were served the actual Durian Ice Cream with Rainbow Bread. I couldn’t help but feel slightly cheated. 😦

Granted, it was probably our fault for misreading the name but surely Goodwood Park Hotel could have done a better job at coming up with a more distinctive name for the rainbow bread, right? Or perhaps, place a picture of the product somewhere on the menu to avoid confusion (especially) among first-timers like us because I’m sure we weren’t the only ones being misled.

But anyway, we tried the one with the rainbow bread (a scoop of D24 durian ice cream sandwiched between bread) and subsequently bought a piece of the Durian Rainbow Ice Cream Cake (a layer of vivid-coloured cake hugging the core of the D24 durian ice cream) before we left the restaurant. Countless photos of the latter have been making the rounds on various social media platforms so it was absolutely necessary to try it or my durian buffet experience would be incomplete. Both of them contain luscious D24 durian ice cream but of course, the one embedded in the Durian Rainbow Ice Cream Cake was bigger, richer and more satisfying which tasted a lot like the actual fruit. For S$11.75++, you’re actually paying for the novelty. It’s delectable but a little too expensive for a cake slightly bigger than the size of my.. palm? Still, I’d recommend durian lovers to give it a try 🙂

On the overall, the dessert buffet with durian pastries was a hit or miss and definitely not worth the price tag. But the Taiwan porridge à la carte buffet was commendable and certainly warrants a second visit.

That’s all I have for this review!