Hello everyone! I’m back in my blogging mode now that my exams are OVER! *pops champagne*

Today’s topic will still be food, but I believe many of you would be able to relate to this because..

Jamie Oliver opened his first restaurant in Asia on 17 July 2013 at VivoCity Mall, Singapore. I had somehow forgotten that he has a venture here until I unknowingly walked past his restaurant one day while trying to get to the taxi stand. I told Bf that we had to try this one day and we finally did last Sunday!

Tucked in a more secluded corner of the mall, Jamie’s Italian is clearly crowd magnet because it was the only restaurant with a queue among many others there, albeit a short one. They have an excellent table reservation system which would send the waiting guest a text message when a table opens up (thus explaining the short queue). As it was an impromptu decision to dine there, we had to wait awhile (for only 30 minutes, a reasonably short time considering that it was a weekend) before we could get a table. But with that system in place, we were able to wander around the mall while we waited. 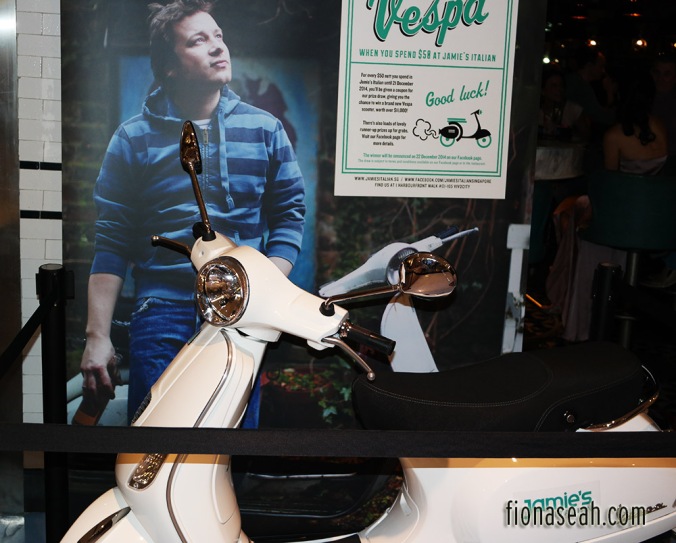 There’s an ongoing contest which patrons can join to win a Vespa!

The menu (click to enlarge). There’s a cocktail section at the bottom but I cropped it out because I won’t be featuring anything from the bar here!

I like that the menu is nailed onto the wall next to the restaurant entrance so that anybody could view it without having to feel pressurised by the wait staff to dine there. It’s not their fault, I know. But don’t you just hate it when someone in the restaurant comes up to you when you’re merely browsing the menu on the display stand? I do! And rejecting them would make me feel so bad 😦

The items on the Pasta section have two different pricing because they signify two different things. The lower-value is for starters while the other is for mains.

You can hardly see what’s in the restaurant from the outside because it’s so dimly-lit, making it an almost-hazardous place for people with terrible vision like me because I may just trip over something if not careful. Some patrons even needed the light from their handphones to read the menu. It was that dark, too dark for photo-taking too (hence I had to depend heavily on the camera’s flash). I hope the management would do something about it because I don’t find dining in darkness a form of enjoyment. I would like to see clearly what’s on my plate, please.

But that’s at night. I’m not sure if it’d be brighter during the day so perhaps you guys can give it a shot during lunchtime.

Let’s move on to our orders! 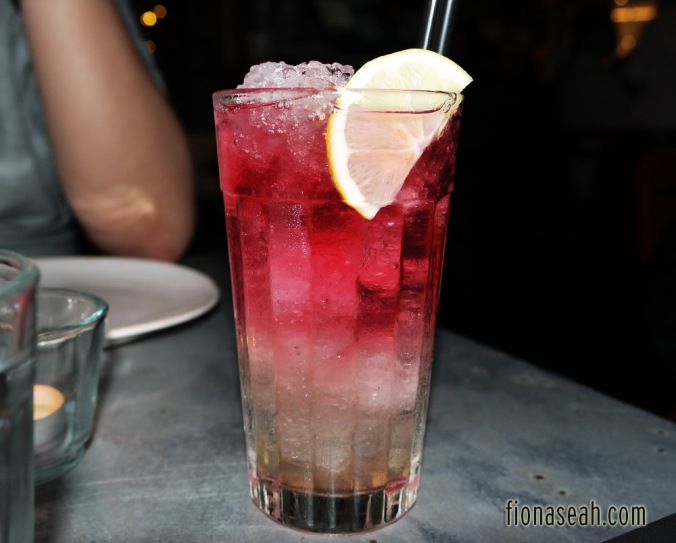 For beverage, we had a non-alcoholic cocktail called Refresher (S$7.50++).

Refresher consists of fresh lemon, elderflower, cordial and cranberry juice. topped with lemonade. We were initially contemplating between their Homemade Italian Lemonade (S$6.50++) and Berry Blast (strawberries, passion fruit, lemon and cranberry, S$8.50++) but we settled on Refresher in the end because it seems to have most of the stuff found in those two drinks. Haha money-pinchers.

But Refresher was good and refreshing! It tasted a little like Ribena but of course, way better and more sophisticated.

Also got ourselves iced water because one cup of Refresher was obviously insufficient.

For appetizers, we had Crispy Squid (or Fried Calamari in Singaporean’s term) which was basically fried squid but with garlicky mayo and lemon. The squid unfortunately wasn’t exactly crispy because it wasn’t sizzling hot. Bf remarked that it might had sat on the kitchen table for some time before it was delivered to us as it was a slightly cold and soggy. The dip that came with it was on the sour side, but it went well with the squid. All in all, it was a passable dish. There’s nothing really fantastic about it. 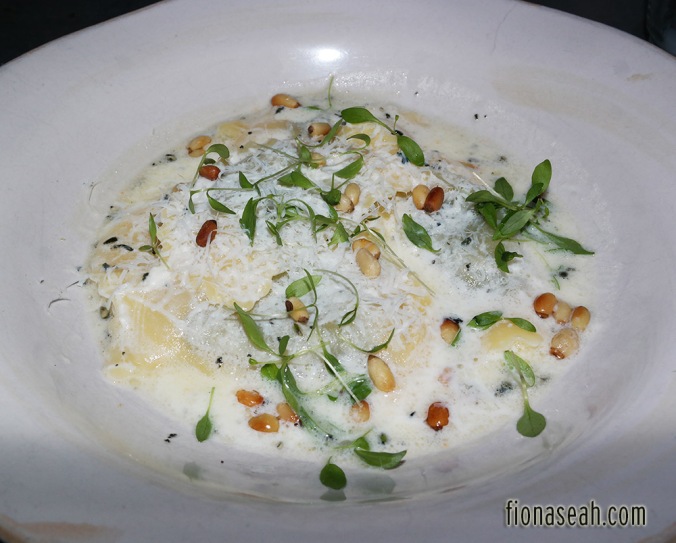 For starters, I had Spinach and Ricotta Ravioli with pine nuts and fresh sage in creamy mascarpone, Italian butter, lemon and olive oil. I felt that the dough was a little too thick and firm and it kinda overwhelmed the fillings. I think there were about 5 or 6 Raviolis in there. The fillings were nice though! And the nuts in the creamy sauce added crunch to the dish. Once again. this is also nothing to wow about.

This Wild Mushroom and Smoked Mozzarella Risotto is the bomb. It is an Acquerelle rice with fresh and dried wild mushrooms and oozy smoked mozzarella. Sadly, this starters belonged to Bf so I couldn’t dig more into it. It was extremely creamy and rich with a nice, thick texture, all thanks to the cheese in it. The rice also had some chew to it and it was really delicious! This is going to be a main course the next time we’re there.

For the mains, Bf and I shared a 220g Rump Steak served with garlic and parsley butter, rainbow coleslaw with natural yoghurt and skinny fries. The nicely cut steak facilitated the sharing and I’m so glad it came this way because otherwise, the hungry Bf would slice a bigger portion for himself, leaving me with a measly piece of meat. *victoryboymeme.jpg* (Just kidding later he scold me)

The garlic and parsley butter is such an unusual topping but I actually love it. It had the right amount of saltiness and it’s so amazing I wanted to wipe it all off onto my own portion. The steak was soft, tender and cooked to juicy perfection. The entire dish was simply indulgent. I couldn’t get enough of it.

I kinda regretted sharing the main course because I was still hungry towards the end of the meal. So lesson learnt, never share anything at Jamie’s Italian. Hahaha.

On the whole, the food was not too bad but there’s definitely still room for improvement. Don’t go there with high expectations (Jamie Oliver’s not the one cooking after all) or you’d be disappointed. I also think that my experience was let down slightly by the unsatisfactory service in the restaurant. Our orders were only taken after beckoning to the wait staff several times and each time we’d be asked to wait but no one would come to us in the end. It might be due to the weekend crowd but yeah, it was really tiring to have to keep getting hold of the wait staff.

But the risotto was really, really awesome so you guys must go there and try it!

On top of that, the prices are actually quite reasonable for a reputable restaurant in a luxury shopping mall, don’t you think? I will definitely return for other items I’ve yet to try on the menu! Any recommendations? 😀