It is not uncommon for beauty brands to roll out sales promotions on International Women’s Day to allow us ladies to pamper ourselves without feeling much of a pinch. This year, however, M.A.C took a different approach in celebrating women’s achievements by teaming up with four female artistes – Tinashe, Halsey, Lion Babe and Dej Loaf – who are dynamically impacting the music industry in a series of exclusive collaborations, launched one after another throughout the month of March.

Titled Future Forward, the campaign empowered each of these female visionaries to create a product that best represents them. As one who clearly hasn’t been following the pop culture of late (it must be the age), none of these names rang a bell for me so I supported the one with the lipstick, obviously! XD

Halsey is an American singer-songwriter best known for her guest vocals on the Chainsmokers’ hit song ‘Closer’. Even though she debuted in 2015 and had been touring with popular acts such as The Kooks and Imagine Dragons, she didn’t quite gain traction until her explicit cover of Justin Biebers ‘Love Yourself” went viral a year later. Apart from her music, people like her because of her badass attitude too. You go girl!

And did you know that ‘Halsey’ is only a stage name derived from a rearrangement of the letters of her first name, Ashley? Cool. 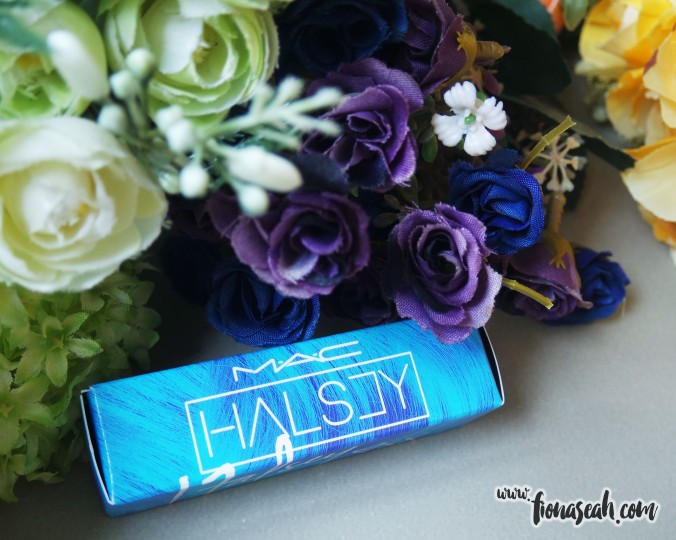 Decked out in a limited-edition electric blue box with a stylised ‘Halsey’ printed on, the packaging stands out from the sea of black in the temporary storage space where I keep most of my M.A.C lipsticks.

“[Blue is] just my creative color. It’s like so many things at once. It’s electric, and it’s bright, but it’s also calm. It’s also ethereal. Blue is just an otherworldly color to me. Blue is the sky. Blue is the sea. Blue for me represents the unexplored territory.”

But the artwork ends there. All sense of exclusivity vanishes the moment the lipstick is taken out of the box. The lipstick tube itself did not receive any creative treatment so it looks just like any other regular M.A.C lipstick without the box. So basic. 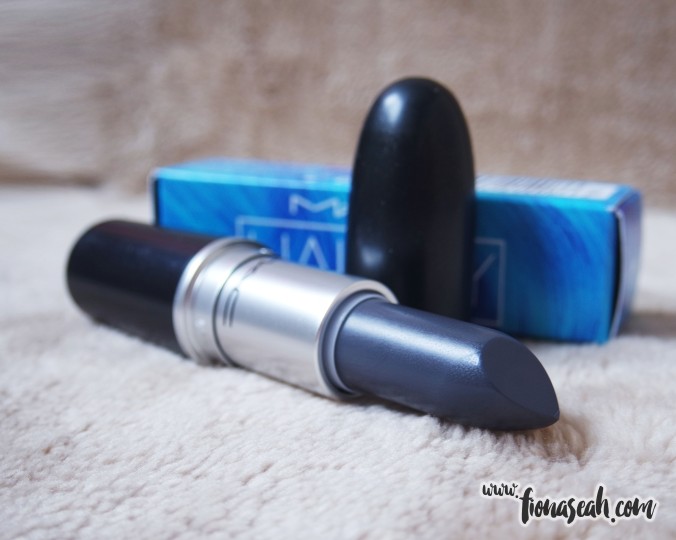 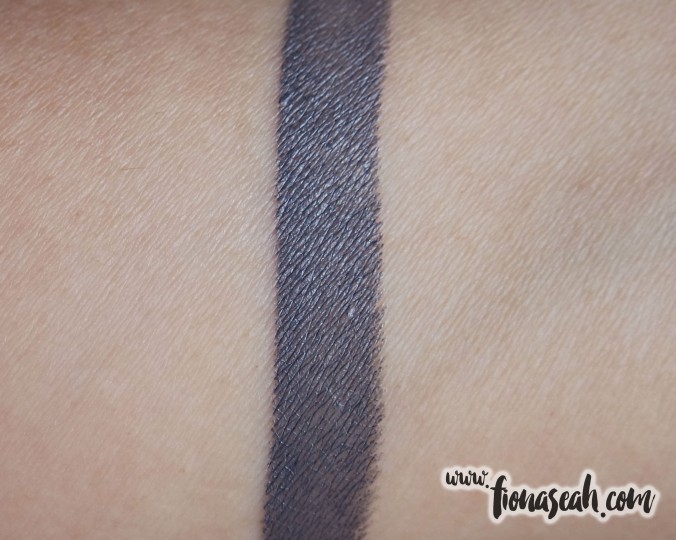 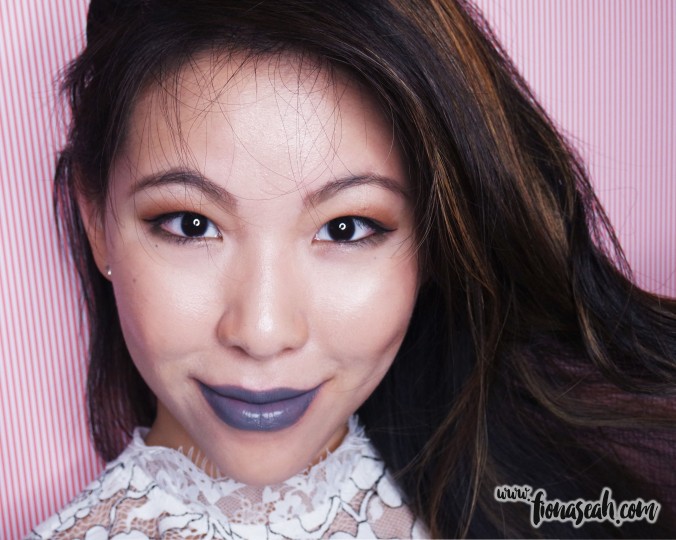 Thanks to Halsey, there’s finally a M.A.C lipstick shade which I can safely proclaim I don’t have a dupe for. I’m so glad Halsey didn’t go ape over her inspiration colour and opted for a blue lipstick which is so been there, done that.

Breaking away from the usual reds and pinks from M.A.C is Halsey, a true grey with matte finish. It is an edgy shade that can also be used alongside another colour to create a beautiful gradient lip. It is quite drying, though, so it tugs at the lips. Be sure to exfoliate your lips before application as it will accentuate any dry patches. Further, It doesn’t give a seamless application when I run the bullet over my lips, leaving certain areas look unevenly applied. The finish is mostly opaque but not flat matte as there’s some slight sheen to it. I say this shade complements fair skin tone very well! 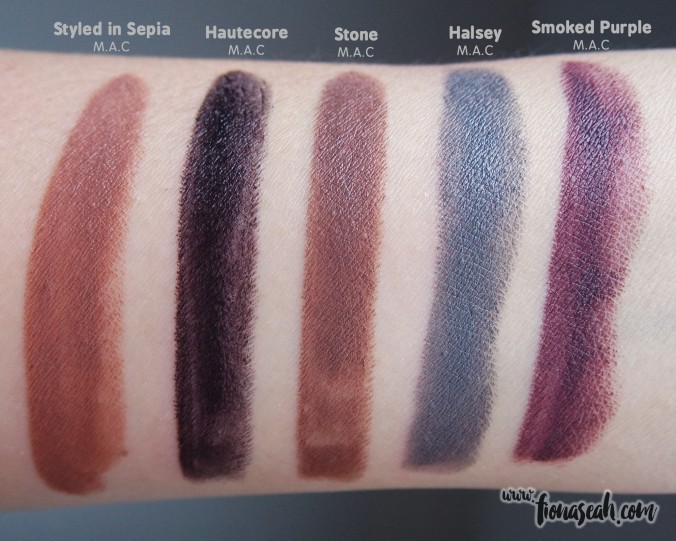 Since Halsey is my first grey lipstick, I don’t have other greys to compare it with (I do have ColourPop’s Petit Four, though, but it’s an entirely different finish). The swatches above serve as a rough gauge of how dark or light Halsey is in real life. 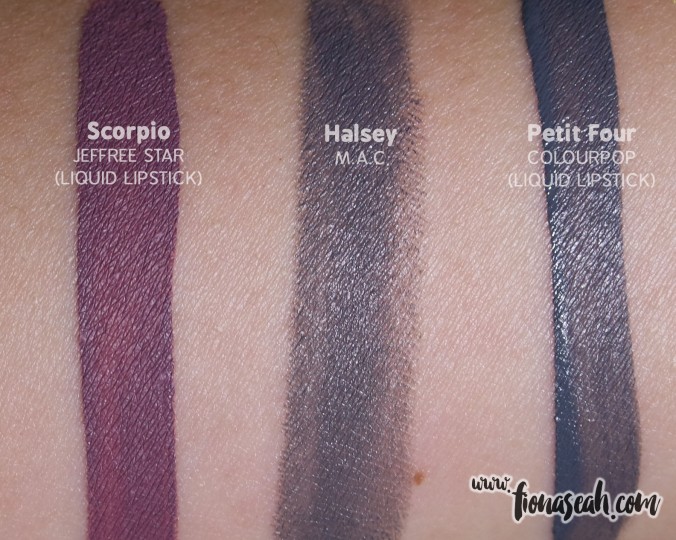 *UPDATED* M.A.C Halsey swatch comparison with other similar-looking liquid lipstick shades, as requested by a reader. This is under artificial lighting.

In case you’re wondering, M.A.C isn’t the first to launch a grey lipstick. A couple of beauty brands like ColourPop (Petit Four), Melt (Space Cake) and Inglot (Matte 436) are already ahead of the game but their grey lipsticks are nowhere as concrete-grey as this. Despite all the shortcomings mentioned about this lipstick, I still think this is a worthy buy because the colour is DOPE, true to what you see on the bullet and it is matte (not some Lustre crap).

To be the sole survivor from the Fashion Forward collection (the rest had already been taken down), it must be something, right? Perhaps that’s why M.A.C hasn’t been very eager to clear out the inventory of this lipstick with a substantial discount like what they did to some limited-edition lipsticks 😉

What are your thoughts on Halsey the lipstick?

M.A.C Future Forward X Halsey is an online-exclusive and is available on MACCosmetics.com for US$17 for a limited time.